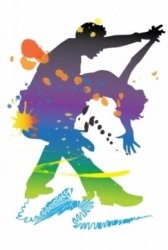 In order to get the most out of dancing, both physically and emotionally, it is important to pick the style that will benefit you the most. Take a minute and look through different styles to figure out which one will suit you the best. There are a lot of styles and this article covers only the most popular and known, but don't restrict yourself to just these if you don't find the one for you - there are many more out there.

Ballroom dancing is one of the most popular and widely known types of dancing, and includes many different styles. All styles involve two partners dancing and can be practiced socially and competitively; because of its use as personal entertainment it is very often used in film and television. Ballroom dancing can refer to almost any style of paired social dancing, whereas DanceSport narrows the list down.

DanceSport is competition-based dancing which includes a particular set of different styles of dancing. International DanceSport is usually divided into Standard and Latin, with the former covering Waltz, Tango, Viennese Waltz, Slow Foxtrot and Quickstep and the latter having Cha-cha-cha, Samba, Rumba, Paso Doble and Jive. This International Ballroom dance category is otherwise referred to as 10 dance category. There is also American Style DanceSport which can be found in the United States and Canada which resembles the above 10 dance system. The main difference here is that American Style allows closed, open and separated dance movements opposed to the International Style where only closed are permitted. The two also have different styling and dance figures.

There are many more other dance styles that can be put under the Ballroom category. Some of these are: Mambo, Bolero, Bachata, Merengue, Argentine tango, Polka, Charleston and they can fall under other categories as well.

Concert or Performance dance is performed mainly for an audience, usually in a theatre seating with a use of particular set music. This type of dance is most commonly choreographed and rehearsed to perfection. The most common style of Concert dance is Ballet which originated in Italy, then spread in France and Russia before flourishing in other parts of the world. Classical music is usually used as an accompaniment with composers writing music specifically for ballet. It has now became an academic discipline taught in schools as well as dance academies and conservatories.

Another concert dance style is Contemporary, which focuses on the exploration of the movement potential of the body; it doesn't have set standards and encourages a personal interpretation of dancing. Contemporary dance can include techniques from other styles and encourages the creation of absolutely new personalised movements. Tap dance is yet another performance dance and it is often considered to be a form of music due to the fact that tap dancers use the sound of their shoes as a percussive instrument. It is now mixed with Lindy hop and some types of line dancing and is mostly based on syncopation and improvisation. Here again, there are many more concert dances like Lyrical, Flamenco, Acrobatic, Jazz, Modern etc.

This type of dancing has been developed by African-American communities in the United States and has been usually performed in social spaces and everyday settings. There are rarely set routines to these dances and they always change and develop. Traditional Jazz might have some techniques from other dances, but it's their improvisation and freedom, as well as Jazz music they are danced to, that distinguishes them. The most known style here is probably Swing which covers quite a number of types of dances like Jive, Lindy Hop, Balboa and Charleston which were mostly developed in 1920s-1950s. Some of these are partner dances and some can be danced solo. Other traditional jazz dances include Boogie-woogie, Tap Dance, Reggaeton, Foxtrot and Jazz dance.

Street Dancing is usually referred to dances developed outside of dance studios and academies in available open spaces like parks, streets and nightclubs. They are often improvisational and encourage socialising and interaction while dancing. These are now brought into dance studios for dancers to learn and are very popular among young people. The above African-American vernacular dance can be categorised under this group as well. However the mostly widespread style here is Hip-Hop which involves a lot of freestyling but can also be practiced and rehearsed. It has become an inseparable part of pop and R&B music as well as still staying a dance of the streets with frequent dance offs. House dance, Breakdancing, Funk, Disco, Rock and Ska are all categorised under Street Dancing and are very often open to innovation and experimentation.

Traditional or folk dances are usually performed at social functions and are dominated by an inherited tradition. These dances don't have a competitive side to the performance of them, rather they fulfill a social function. Very often these dances are categorised by their countries of origin like Greek, Turkish, Lebanese, Indian, Egyptian etc. There is also a number of Folkloric and Ritual dances.

Historical dance style is very straightforward and it stands exactly for what it says, which is dance types from the past, predominantly Western European. Today these are danced for performance or historical reenactments, for fun at themed balls or historical purposes. Another use of historical dance is for films and television. Historical dance is divided into types according to the period of time like Medieval, Renaissance, Baroque etc.

Recently it has become more and more popular to attach social meanings to dancing for events. A great example of that is the Wedding Dance which doesn't particularly have a distinct style but rather depends on each individual couple who then will set a genre or create a sort of medley.