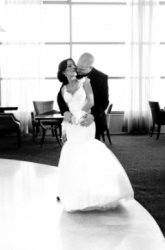 Are you getting married? Is the idea of the two of you dancing in front of the entire wedding reception leaving you giddy? To assuage your nerves we've decided to write an article on the First Dance, so you can forget the fear and concentrate on having fun. We'll also give you pointers on etiquette, and some tips and tricks you can employ to make it memorable for everyone involved.

The 'First Dance', like many dance institutions, has its roots in European court dancing. At a ball, or other high society event that included dancing, it was long-held tradition that the guest of honour would lead the dance. In a historic context this would usually have been royalty or some other distinguished personage, but in the 18th and 19th century, as formal dancing and social events became increasingly democratised and practiced by a cross-section of society, the 'guest of honour' would be anyone for whom the party was thrown. In the case of weddings, the guests of honour, naturally, are the bride and groom.

There's also another level to the marital version of the First Dance, beyond the guest of honour tradition. Symbolically, the First Dance is the first official romantic act the couple engages in after they're married: in short, it's a public demonstration of their affection for each other. In more conservative times, this would have been the first time a newlywed couple could have shared a socially acceptable intimate moment in public.

The key thing to remember is that the First Dance isn't where the couple embarrass themselves for the amusement of the guests, but where they dance to 1. symbolise their mutual affection and 2. start the evening's revelry! Because of this, we suggest that your First Dance should reflect you both as a couple, and your characters and personalities. Don't feel a need to conform to tradition: let the act reflect who you are! To this end, feel free to spice things up a bit, like this couple did.

This also goes for the music. Waltzes are the traditional dance of choice, but the key is to remember that the First Dance is for you, so take social expectation with a pinch of salt.

Tradition has a time and a place, and for some people, Weddings are the perfect event to do things by the book. To this end, the Waltz rule mentioned above applies, as does the notion that one should only engage in a First Dance if the rest of the guests are going to dance as well: one should not conduct a First Dance just for the sake of it. Music choices will again vary by couple, but a good rule of thumb is to make the First Dance short and sweet, and to spice up the music towards the ends to coax other guests onto the dance floor.

One can strike a halfway house between classy traditionalism and personal flair quite effectively, by choosing a song of your choice and learning how to dance to it in a quasi-traditional way: thankfully, all modern music can be danced to, one way or another. For guidance, hiring a dance tutor or looking on online forums should help you in fitting your choice of song to a set dance form. As a rule, working out the specifics of choreography and timing beforehand is always a good idea, since it lessens the chance of something embarrassing happening. Remember, if you're nervous, practice makes perfect!

Ultimately, you should enjoy yourself. The First Dance should be for you, and you alone: when you're swinging each other round the floor the only people you both should be conscious of is each other.