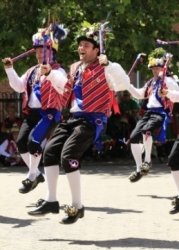 They have their roots, like many cultural components, in humanity's prehistory, and have evolved and persisted over the subsequent millennia. A classic example from Britain would be Morris Dancing, and its Sword Dancing, Mumming and Hodening subforms. The character of Morris Dancing is essentially pagan, with a heavy focus on themes of rebirth, springtime and animalism. As such, many Morris teams have a beast, a dancer dressed as a real/mythical animal, who dances separate to the main dance and interacts with the audience; and a fool, a gaudily-dressed member who dances separately and jests with the audience. Dancing types similar to Morris are present throughout continental Europe, manifesting as subsets of the ball de bastons dance Western Europe (especially Spain and Portugal), to the căluş dance tradition in Romania: something that points to all European folk dances having a single, ancient origin. On the subject of inter-linked traditional dances, it is worth mentioning that 'sword dances' are found all over Europe and Asia, from China to Scotland.

Outside Europe, there are an uncountable number of traditional dance forms. In traditional Sub-Saharan African belief, dance is a fundamental expression of rhythm, which is an expression of life itself. In fact, many languages in this area have no word for rhythm, or even music, both being expressed by the word for life. This is reflected in traditional dance styles, with full-body articulation, no barriers between audience and participants, no 'pairing' of male/female couples and complex rhythmic structures being the norm. In these traditions, to dance is to demonstrate the life of the community, to represent the beating heart within and without. Dances are conducted as part of cultural events, mostly the liminal stages of a people's lives such as coming-of-age, marriage, birth and death; as well as on special occasions, such as when welcoming guests to the village, and when summoning spirits. The most common musical accompaniment is the drum, although some groups (such as the Maasai) use the human voice as the sole source of instrumentation.

This concept of dance as a spiritual expression also appears in Native American cultures, and is once again accompanied by drum work, representing the cosmic heartbeat. Dances are performed in circles, and the clothing worn by dancers reflect the animist aspects of the particular dance: therefore there are Eagle, Bear and Rabbit Dances, as well as agriculture-focused Corn and Rain Dances.

This animist dynamic is seen yet again in Indigenous Australian dance, where the act of dancing to music is believed to invoke the Dreamtime, the world's creation era, in the dancer's present. The Dreamtime creation story tells how the world was created by various animal spirits: hence, dancing involves the imitation of particular animals, enabling dancers to channel the essence of the associated spirit animal.

In Asia, there exist other types of 'traditional' dance, derived from the 'high' culture of the elites. So we have Beijing Opera (more of a mixture of martial arts, ballet and music) which assumed the same function as its Western counterpart as entertainment in royal court; yangge, a Chinese folk dance that was adopted by the elites in the 12th century Song Dynasty and persists today as an official aspect of Communist Party celebrations; odori and mai, Japanese Kyoto court dance traditions; and ancient Indian dance forms, which developed as a form of religious expression and then began gracing royal courts (and still remain fiercely popular today, thanks to Bollywood).

Learning traditional dances can be a whole lot of fun. The are usually group affairs (with the exception of some Indian and Islamic solo dances), and usually don't contain the pressure of one-on-one male-and-female 'high culture' European ones, like Latin or classical dances. Not only that, but they are usually indicative of something higher: either a cultural or spiritual aspect, instead of being performed for it's own sake. Like learning any dance, it'll be a great way to meet new people and develop new friendship groups; but you'll also be learning about another fascinating cultural tradition at the same time!