Meet some of our Advanced Euphonium Teachers 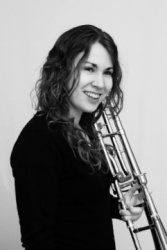 City of London
Trombone, Euphonium
Other: ABRSM Grade 8 Trombone (distinction) (2013)
James is an exciting, young trombonist based in London. He is in his fourth year at the Guildhall School of Music and Drama where he is taught by Simon Wills, Eric Crees, Chris Houlding, Peter Gane, Mark Templeton and John Kenny. He is a versatile musician, performing in a wide range of genres and e...
View This Tutor
(2 reviews)