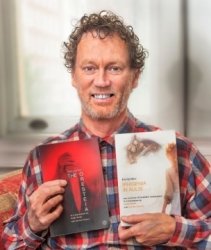 This is how 2 referees rated Andy:

I am a highly regarded Acting Tutor (author of the acclaimed 'Acting Shakespeare’s Language') who has been teaching at the highest level, both in England and Ireland, for over thirty years.

Having lived and worked in Dublin for many years, I have recently moved back to London and am making myself available for some private one-to-one acting lessons, preparation of audition pieces (both classical and modern) etc.

I have a BA Hons. from Queen's University, Belfast, in English Language and Literature (1975), and an MA in Theatre Arts, University of Leeds (1976).

TEACHING: I have taught at RADA (was, for 7 years, on their audition panel), Shakespeare’s Globe, Dublin’s Trinity College and Gaiety School of Acting, the National Theatre School of Canada, The Actors' Centre, London, and with the Classic Stage Ireland Acting Studio.

DIRECTING: I was, for ten years, Artistic director of Classic Stage Ireland and have directed at Dublin’s Abbey and Gate Theatres, Galway’s Druid Theatre, Glyndebourne, Lyric Theatre, Belfast, Wexford Opera, Scottish Opera, London’s King’s Head and Soho Theatres, and for some time was Associate Director at The Bristol Old Vic.

Depending on their level and experience, I endeavour, not only to improve the student’s performing of individual pieces, but to help them grasp some basic or more advanced principles, which they can take away and begin productively to work with on their own.

SOME STUDENT RESPONSES TO MY TEACHING

ANDY CAME HIGHLY RECOMMENDED to me by the director of a play I was performing in. I was looking for some coaching to keep me active and to keep learning. I had completed some very average part-time courses with various coaches, 4 weeks here, 4 weeks there and also dabbled in some well-known techniques such as Meisner. Many of these courses or coaches tend to over-complicate the process or maybe it is that they can't 'teach' to the audience in front of them. Andy was very different, making acting simple again. I learned so much in such a short space of time. I find myself sharing his advice with fellow actors, it is Andy's advice I hear when auditioning , learning script or performing. What makes him such a great teacher is his simplistic approach, vast knowledge, undoubted love of acting and easy going, very approachable manner. He cares about you, not just the actor but the person. Neil Kelders, Actor

ANDY IS AN EXTRAORDINARY TEACHER because he enables the actor communicate to an audience the transformative power of drama. No matter whether you are a novice or a seasoned performer he skillfully identifies for each individual the keys to bringing their performance to the next level. His expertise and understanding of how to perform Shakespeare and other classical texts are rare and exceptional and his ability to bring forth the hidden magic of modern text remarkable.
Myself and other students of Andy have often spoken amongst ourselves of how exciting and life changing working with him has been. Rosemary O’Loughlin, Actor

I RECEIVED ENORMOUS BENEFIT from attending Andy’s classes over a two year period. The sense that the craft of acting was important and worthwhile informed the class at all times. Thorough physical preparation through stretching and breathing exercises was a sine qua non. Great patience and encouragement were shown by Andy to all students as we navigated our way through the work. Andy’s love of classical theatre and language always shone through but more contemporary work was embraced with equal enthusiasm. Andy is a true “Man of the Theatre” keen to pass on his knowledge and experience to all who wish to follow this noble vocation. Padraic Mc Ginley, Actor

I HAVE ATTENDED CLASSES WTH ANDY in Classic Stage Ireland’s ‘Acting the Text’ workshops, and also in one-to-one coaching sessions with him. I can honestly say that he is one of the best acting tutors I have worked with. His teaching methods are clearly borne out of years of experience, not just as a tutor, but as a practising theatre artist and director. His approach to acting classic texts in particular is unique and empowering. Above all, with Andy, you learn how to serve the text fully and faithfully - that is our job as actors. Emer Casey, Actor, Drama Teacher and Facilitator.

i HAVE WORKED REGULARLY WITH ANDY (2014-2017) both in his "Shakespeare Acting the Text" classes as well as in individual private classes in preparation for roles.

I have found my work with Andy to be enormously stimulating, satisfying and enlightening. He has made Shakespeare both accessible, engaging, and enjoyable for me. A fundamentally important aspect of my work has been my own journey of personal learning and discovery as an actor. Andy has greatly assisted me here too.

He has a keen perceptive eye and ear, and his feedback has always been constructive, germane and cogent. I have also found Andy to be enormously understanding, supportive and encouraging to me in my work. Eugene McCarthy, Actor

ANDY'S WORKSHOPS AND 1-TO-1 CLASSES were invaluable, both in helping me prepare for specific auditions and, more broadly, in deepening my understanding of performing classical or modern text. Andy has a knack for demystifying Shakespeare, making the language accessible and real. His breadth of experience means you can trust his insight and his warmth and the atmosphere of non-judgement and encouragement he creates make him a great teacher. Nathan Gordon. Actor

I HAVE ATTENDED ANDY'S ACTING CLASSES for a number of years and I can only speak highly and enthusiastically about his approach to teaching the craft of acting, especially Shakespeare and the classics. His knowledge and insight of the Shakespearean language has helped me to a greater appreciation and understanding of the richness of the Shakespearean and classical text and the complexity of the roles I was preparing for.

Andy has given me renewed encouragement in preparing my own one woman play by working deeply and intensively on creating the character and seeing her in a new and different light.
As an instructor of theatre, Andy’s fascination with the development of an individual artist’s technique is highly infectious in the classroom. He possesses the rare ability to teach with a firm hand, while also allowing students the space to come to their own conclusions on complex topics. His sense of story is both clear and passionate, and his development of theatrical action is sharp and precise. Hedda Kaphengst. Director, Klawitter Theatre Group