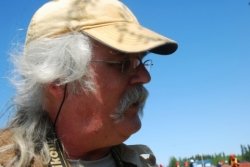 This is how 2 referees rated George:

A brief history of my communications work…

I trained in communications, media creation and public relations back in the 1970s… so I learned the traditional, non-digital ways of doing things… print… writing, editing layout design with typewriters, paper and wax; radio with tape… editing with a razor blade and a splicing block; photography with a film camera… processing and printing in the darkroom… and then television with open reel tape recorders… shooting live to tape or broadcast because in those days, editing required much more expensive equipment and took too much time… of course, these days I everything I do is digitally based.

Very early on I earned my keep by tutoring others in the mass media arts and as a freelance producer.

My first $100 a day job was as a contractor for a senior citizens advocacy group in Montreal producing a weekly radio program for them that was broadcast on the largest English language radio station in town, CJAD.

I was hooked… I found my vocation… giving voice to others as a communications enabler. A career that has enabled me to work with and train literally thousands of intelligent and creative people from many countries and cultures around the world… the bonus was the opportunity to also travel and live in those cultures and countries.

Over the years, small projects and budgets led to larger ones. My skills in project management grew as did the opportunities to personally grow and learn more about the creative process of communications, management of creative people & projects, media planning, strategies and research. In Toronto, at the largest community TV station in Canada, I recruited, trained and managed a three hundred strong corps of volunteers that spanned the ethic diversity of the city. In Beijing I worked as copy editor for China’s largest english language publication.

My earliest Northern experience occurred over several years when I was contracted by the regional Inuit radio and television broadcaster to train the management and production staff for the 13 communities of Nunavik, Arctic Quebec. During my years there, budget projections regularly topped $900K/year.

My second Northern media experience was nearly two years in Inuvik as a broadcast TV production trainer at the Inuvialuit Communications Society.

My introduction to educational media came during my college years when I worked for the AV department and the print shop while writing and editing for the college paper and broadcasting on the college radio station. My first non-broadcast media job was as the senior audio-visual tech for a major college in Montreal. I then went on to work as the educational media consultant for a large, 12 school regional elementary/high school board in Quebec’s Eastern Townships where, as the person in charge of audio-visuals I managed both the media capital acquisition and operational budgets for the board.

In 1999 the Nunavut Department of Education’s curriculum development division hired me as a lead media specialist. My first duty there was to set up the divisional media facility by assessing the divisional hardware and software needs for the creation of all the new printed and electronic/digital curricular materials for the K-12 programs of the Nunavut school system. Then during the next four years I worked with the other staff on producing all the print and electronic/digital and multimedia material in Inuktitut, Inuinnaqtun, English and French to meet the need to transform the territorial curriculum to an “Inuit centered” one.

Although I am French / English bilingual and do not speak, read or write any other languages, I have, with the assistance of translators, professionally produced media in Inuvialuktun Inuinnaqtun, Inuktitut, Mandarin and Odia, the official language of Orissa, India.

So, in summery, I have significant journalistic & educational media experience in print, electronic, digital and new media; strong writing and presentational skills; extensive computer skills; creativity and curiosity; an ability to work well under pressure; the proven ability to work quickly and to manage multiple projects simultaneously; proven leadership abilities and the ability to establish and maintain excellent interpersonal relations, especially with individuals from a wide variety of cultural and ethnic backgrounds.

March 2011 YOUTH PHOTOGRAPHER MENTOR - Normal Wells & Colville Lake NWT. Presented a week long digital photography workshop for young photographers in each of these communities under the auspices of **Web Address Removed** funded by BHP-Billiton and the NWT Arts Council.

May 2010 YOUTH PHOTOGRAPHER MENTOR - Hay River NWT. Presented a digital photography workshop for young photographers under the auspices of **Web Address Removed** funded by BHP-Billiton and the NWT Arts Council.

Summer 2001 DIGITAL JOURNALISM TRAINER - Media Action International - Geneva, Switzerland. Created & presented a 12-day workshop (in country) on The use of e-mail and the internet for Rwandan journalists at the National University of Rwanda, Butare as part of a UNESCO journalism training project. (Presented bilingually to journalists who’s second language was English or French)

1985 PRESENTER - ANNENBERG SCHOOL FOR COMMUNICATION, University of Pennsylvania. Philadelphia, United States of America at this meeting of the Visual Studies Conference I presented a paper on and video tapes of some of the work of the Inuit broadcasters of Canada. **Web Address Removed**

1988 GUEST ARTIST-IN-RESIDENCE - VISUAL STUDIES WORKSHOP, Rochester, NY, USA, with a grant from the US and NY Endowments for the Arts for one month in residence at this postgraduate facility. The Visual Studies Workshop is committed to expanding the potential of the media arts, and their affect visual culture, through innovative programs in education, research, production and community service. **Web Address Removed**

September 1987 VISITING ARTIST - INTER-ACCESS, Toronto, Ontario, This computer art group invited me to present a 2 day workshop on digital animation with the Aniputer as part of FREEZE, 3 weeks of computers & video with the assistance of the Canada Council.

July 1986 GUEST ARTIST - VIEWPOINTS ON ART AND TECHNOLOGY for the Inter-Arts Program of the Banff Centre. At the invitation of the program, I went to produce an installation for a performance called "Personal History." **Web Address Removed**

Introduction to Radio Journalism
A production course in how to use the microphone, audio tape & digital audio equipment. Also, how to edit audio, especially for use in broadcast journalism. Brief overview and history of electronic journalism and some issues of controversy.
**Web Address Removed**

Photojournalism
Focuses on developing the skill of using the still camera for careers in journalism, public relations and the print media in general.
**Web Address Removed**

Interpersonal Communications
This course is designed to help focus understanding on human communication behaviour and on basic principles of effective communication, useful in social settings and interactions.
**Web Address Removed**