We understand that finding a tutor online can be a daunting prospect. We hope that the following press coverage, recommendations and awards will help to show you that we are a great website from which to source or register as a tutor.

We have also appeared in The Independent, Cambridge Evening News, several London magazines and of course, the education press.

First Tutors is also very proud to be recognised by The Good Schools Guide as a recommended place to find a private tutor. Tuition agencies must undergo extensive questioning before being listed in the guide.

First Tutors has been fortunate enough to win and/or be nominated for several business awards.

First Tutors has again been nominated by Education Investor for an award announced in November 2011. We picked up the trophy for best supplementary education provider in 2010 and have been nominated again this year. These awards celebrate the successes of the education industry and are judged by an independent panel of highly esteemed industry experts.

First Tutors won at Education Investor's award ceremony in November 2010. We picked up the trophy for best supplementary education provider (a category which primarily includes private tuition companies). These awards celebrate the successes of the education industry and are judged by an independent panel of highly esteemed industry experts.

Anita Moss, Director, took to the stage to collect the award and comments, "We feel delighted to receive this award, particularly given it recognises our role in education. Whilst we are considered a dotcom business our primary passion is to facilitate helping people learn, so be recognised as a strong private tuition firm is particularly meaningful.

Not so lucky with this one, but still delighted to be a finalist! This award recognises "young British entrepreneurs and digital excellence". First tutors was a finalist with three other businesses run by young entrepreneurs.

First Tutors won twice at the Big Chip Awards, celebrating the best of the digital industry. Judges remarked that, "A simple, effective use of interactive media to link tutors with those needing their services, the site was clear, the business model uncomplicated and the success obvious."

National Finalist - Best Use of Technology by a Woman Under 30, Blackberry Women and Technology Awards 2008

We were almost recognised for our strong use of technology to join tutors with tutees! Oh well. 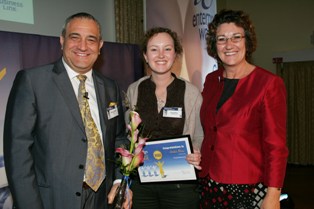 We pick up an award for helping families to find tutors in a much more affordable way.

First Tutors is regulated by the Department for Business (BIS), with whom we enjoy frequent discourse as an agency with tens of thousands of tutors on the books! We are also members of the Federation of Small Businesses.

First Tutors: Canada is Canada's newest and most comprehensive online tutor-finding network, where private tutors offering private tuition and home tutoring across Canada can promote themselves for free through online profiles. These profiles display the tutors' credentials, any references/Criminal Background Checks they have available, and the feedback tutors have received from previous/current clients. As such these profiles offer the tutor an excellent facility to introduce themselves to prospective students and parents. First Tutors are the UK's leading online tutor-matching service, and hope to extend our reputation across Canada.

We recruit tutors for all age groups - from kindergarten to elementary, secondary school to university - and for a broad range of academic subjects from Math, English and the Sciences to more niche subjects, such as business or art. We aim to have a number of tutors available for every discipline to allow patrons more freedom of choice.

In 2005 First Tutors was launched in the UK and has since enjoyed wide-spread popularity and international growth. The website has featured in publications such as The Independent, The Daily Telegraph, The Daily Mail, Cambridge Evening News, Enterprise Nation, Mumzone, Education Today, The Good Schools Guide and on BBC Breakfast television, BBC Radio Cambridgeshire, and several more.

Any media inquiries are welcome, and First Tutors: Canada can be contacted below. Anita Moss (co-founder) has given seminars and interviews on young entrepreneurship, women in business, running a small business and, of course, home tuition and private tutoring. She would be delighted to provide an industry comment or help with case studies.