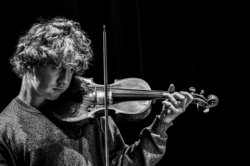 This is how 2 referees rated Zack:

Zack is a nationally recognised concert violinist and teacher who has over the years confirmed his position as one of his generations most inspiring musicians.

Zack’s violinistic journey began at aged 10 with Hampshire Music Service and he was quickly recognised to have outstanding potential, resulting in a Hampshire Music Hub Scholar Award. By the time he was 16 an additional scholarship had been awarded to study Music at Queen Mary’s College, Basingstoke. It was then he began private studies with Finnish Concert Violinist Frida Backman, alongside numerous supporting lessons with both Guildhall School of Music Professor Simon Fischer and Violinist Nikki Rodgers. Around this time he also achieved a distinction mark of 98% in his final Grade 8 violin practical examination.

As a student at Queen Mary’s, Zack set about creating a lasting impact on the Music Department by setting up a String Orchestra, running numerous chamber music projects, as well as lecturing performance classes and seminars. All achieved on top of a full academic timetable. Because of these efforts he was awarded an Outstanding Contribution Award by the principal and was subsequently invited to become an honorary member of staff, taking up the role of Musician in Residence. Here he taught both performance and academic studies on the A level music course.

During this time, Zack auditioned successfully for a number of the UK's leading music colleges and accepted an offer to study Violin Performance at The Royal Birmingham Conservatoire with an Excellence Scholarship. This is where he obtained a BMus (Hons) degree under the tutelage of Head of Violin Nathaniel Vallois and Manchester Camerata Concertmaster Caroline Pether. Whilst here he also had periods of study with Suzanne Stanzeleit, Jiafeng Chen, and Baroque violinist Lucy Russell.

Whilst in Birmingham, Zack took several modules in Advanced Pedagogy and teaching, whilst also dedicating significant amounts of time to the researching of Pedagogical Methods. It was due to this commitment that he was recommended by Adam Whittaker to teach and observe at the Royal Birmingham Conservatoire Junior Department. Here he assisted Head of Chamber Music Jean Gubbins, and Violin Professor Sam Mason. Zack was also offered a post on the ARCO Project by Dr Louise Lansdown where he taught an advanced online violin class at the Chennai Conservatoire. Alongside his teaching practices here, Zack also engaged in extensive research into Recordings, Musical History, and Theoretical analysis.

He is also an experienced ensemble musician, having played great deal of the standard orchestral repertoire. Highlights include playing leading roles for the CBSO Academy and Youth Orchestras, side by side schemes with the Welsh National Opera, Orchestra of the Swan, and Birmingham Royal Ballet, as well as performances for numerous high profile Conservatoire Orchestral projects. These included several concerts which have been broadcast on both BBC Radio and Classic FM. His experience was augmented yet further by regular individual coaching from renowned ESO Concertmaster Zoë Beyers, specialising in auditions, ensemble playing, and excerpt preparation.

Chamber Music is an area which Zack has made a large part of his career, specialising in the performance of piano based string repertoire. Alongside frequent one off collaborations, he regularly plays both with the Castagnino Piano Duo and the Félicité Piano Trio.

Félicité in particular has performed to great critical acclaim, with the most recent highlight being invited to perform Shostakovich’s 2nd Piano Trio at The International Cadenza Chamber Music Festival in London with huge success. Zack is also frequently asked to deputise for other ensembles. Mostly recently he did this for the well established Saorsa Quartet where they played a series of concerts performing the Beethoven Cycle of Quartets.

During his time at the Conservatoire, Zack also received regular specialist chamber music coaching with the Violist of the Lindsay Quartet Robin Ireland, Head of Piano John Thwaites, and Professor of Cello Matthew Sharp. Alongside this he also took part in masterclasses from groups such as The Schubert Ensemble, The Castalian Quartet, The Heath Quartet, The Barbican Piano Trio, and The London Bridge Piano Trio.

See my website and other online presence for more information about my work.

Teacher of both Performance and Academic Classes on the A Level Course at QMC, Basingstoke.

Teacher for the ARCO Project, tutoring at the Chennai Conservatoire.

Extensive experience running my own private practice, teaching anyone from beginners up to post Diploma and Music College level students.

My significant performing experience has given me unique insights into the majority of the violinistic repertoire. In turn it allows me to pass down to my pupils knowledge taken from a wide variety of contexts and styles, as well as giving students strategies to be able to perform at the highest possible level.

I enjoy and take pride in teaching a diverse range of students from all ages and backgrounds. As someone who originally came from a non musical family I understand how learning a stringed instrument is sometimes a difficult, but extremely rewarding process. It is because of this that I realise just how important flexible, yet focused teaching is in helping students achieve their goals.

During my own studies I have been educated by teachers from the Russian, French and American schools of Violin technique.
On top of this I have also done a significant amount of research into both Violin technique and playing styles originating both from modern and historical practice.
This knowledge has helped me to understand that there are numerous approaches to nearly all aspects of playing, meaning that technique can be truly personalised to fit each individual student. This flexibility ultimately speeds up the learning process as every player approaches the instrument differently both mentally and physically.
My method is heavily based around setting up a reliable and relaxed technique which will allow any student to play with great freedom and musicality. This will be developed around both carefully selected repertoire, studies, and exercises.
I am able to prepare and enter students for any board of graded exams when required, but also encourage learning for the overall joy of playing an instrument. I do this as working through grades can be inspiring for some, however limiting for others.
I am also happy to teach Viola, Piano, Music Theory and Aural listening skills.
I have an ongoing Enhanced Level DBS Certificate subscription, allowing me to safely work with students of all ages, however pupils under the age of 18 should be accompanied by an adult for the duration of their lesson. I generally teach at home, however under certain circumstances will consider traveling for an extra fee.

ZackFrom Adam (5/5): Zack is a fantastic teacher. His knowledge and experience are astounding. My daughters lessons are fun and informative and her confidence is steadily growing. I would recommend Zack to anyone starting out. The perfect musical role model!
ZackFrom Helen (5/5): My daughter has received a number of lessons now from Zack and she is always so excited to attend.

We’ve been so impressed with his dedication and calm, positive teaching approach. As soon as Zack sets a few little tasks our daughter can’t wait to complete them.

We couldn’t be happier with her progress so far, it’s the first time she has ever picked up an instrument and she’s so keen. Thanks Zack for all your encouragement.