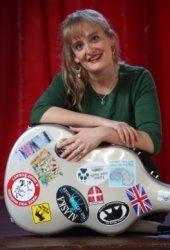 This is how 3 referees rated Valerie:

Started my classical guitar studies on a half-size Ramirez at the age of three with my mother and by six, I had the opportunity to study with maestro Alexandre Lagoya at the Académie Internationale d’Eté in Nice, France and eventually with Ako Ito.
My Bachelor’s Degree is from Peabody Conservatory where I studied with Manuel Barrueco on scholarship and I received my Master’s Degree from Radford University where I was awarded a Graduate Teaching Fellowship.
As a private instructor, my students have received scholarships to prominent universities, such as University of Texas, Schwob School of Music at Columbus State University, Texas State University, Arizona State University, University of Louisville, and University of North Texas. Many of my students have won national competitions or placed in international competitions such as the prestigious Guitar Foundation of America.
I have performed on radio (included the Iain Lee Show on BBC Three Counties Radio), television, in over 30 festivals, both in the United States and Europe, and am an international competition prize-winner in 8 competitions.
Two recordings; Ex Tenebris… Lux, a solo project and Presti, an ensemble project, which were recorded at the National Public Radio studios in Houston.
Currently, I live in Yeovil, Somerset and continue to concertise and teach throughout the UK and the States. I teach online if the student has had previous experience. Currently, I have students in the States, UK and Switzerland so I am used to teaching online. In order to teach students 16 years old and above in my home, they must have had both vaccinations and wear a mask. I am clinically extremely vulnerable and must be **Web Address Removed**

Classical Guitar only (I do not teach electric or steel string): students will learn correct position, improve upon sight-reading skills, basic theory. Along with the repertoire appropriate for the student's level, they will also keep up with warm ups and technique (scales, arpeggios, tremolo, rasqueado, Etudes, etc). I use the Trinity Books, ABRSM Books for Repertoire & Theory if students wish to follow the systems.
The more advanced the student, the more advanced the repertoire & technique. Suggested books: 'Pumping Nylon' by Tennant and Diatonic Major & Minor Scales by Segovia; Etudes by Sor, Carcassi, Villa-Lobos, Coste. For beginner/intermediate students some Method books that are interesting to work with in lessons: Pujol (Books 2 and 3), Noad (Complete Book for the Guitar), Sagreras. Students are encouraged to bring their own books that they have acquired.
Note: if students have started to work from the Trinity Music Books, we can continue to use this grading system.