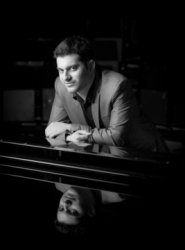 This is how 2 referees rated Stathis:

Stathis offers a discount of 50% on their first / introductory lesson!

The pianist and composer Stathis was born in 1993 and began his piano studies at the age of 5 with Eleni Kokolaki. His varied repertoire consists of works from Bach and Scarlatti to contemporary works of Lowell Liebermann, Carl Vine and Greek contemporary composers. In addition, his repertoire includes numerous piano concerti and he has appeared several times as a soloist with orchestras.

Notable performances were with the Hellenic Broadcasting Corporation Youth Symphony Orchestra (E.R.T.), the Athenian Ensemble (UK), the Thessaloniki State Conservatory Orchestra, Anagennisi Conservatory’s Orchestra, and the Ioanna Sygkelaki Conservatory’s Orchestra. In addition, solo performances have been in the Greek National Opera (Alternative Stage), the Bridgewater Hall of Manchester UK, etc. In addition, he has performed both as a soloist and in chamber ensemble at the 1st and 2nd 'Annual Student Research and Creative Arts Symposiums’ held in 2015 and 2016 organized by the American College of Greece (ACG) as well as the Un Voyage des Impressions 2018 and Joseph Haydn: Innovation and Inspiration 2019 chamber music festivals held on the Royal Northern College of Music (RNCM).

In addition, he has been the Principal conductor of the Anagenissi Conservatory Chamber Orchestra for the season 2015-16. As a composer, his compositions have been performed in important places such as the Greek National Opera (Alternative Stage), Thessaloniki Music Megaron, Royal College of Music of London, RNCM, etc.

His education includes Bachelor in Arts (BA) in Music from the ACG with Summa Laude and a BA (Hons) in Music Performance (Piano) from the Open University of UK with First Class Honors, having received a full tuition scholarship (H. C. Krentzman), with Prof. Dimitri Toufexis. The ACG (music dept) has also awarded him a prize in a special ceremony for his outstanding performance. In addition, he holds a Master in Music (MMus) in Performance with Distinction from the RNCM, having a full tuition scholarship from the prestigious Onassis Foundation of Greece, with Prof. Frank Wibaut. He also graduated with a Postgraduate Diploma (PGDip) in Performance at the RNCM with Prof. Wibaut. Currently, he also studies composition with Dimitri Economou in the Anagennisi (Renaissance) Conservatory.

In addition, he holds: at the Anagennisi Conservatory with Prof. Toufexis, a Piano Soloist Diploma with Honors and First Prize for the highest grade that the Conservatory has ever awarded. With Prof. F. Pappas and G. Malefakis the Music Theory Diplomas (Harmony, Counterpoint, Fugue-Orchestration) with Honors. In addition, he has studied orchestral conducting with Prof. Miltos Logiadis in Athens and Prof. Mark Heron in RNCM. Furthermore, he has studied composition with Prof. Adam Gorb at the RNCM.

2011-2016: Private piano lessons to students from beginners to advanced students in Athens

2011-2016: Piano and Theory tutor at "Anagennisi" (Renaisance) Conservatory In Athens

2013-2015: Assistant and accompanist at the American College of Greece

Each student’s level and age require a different approach for music teaching. For instance, I prefer to teach the very young students (ages approximately 5-7) how to understand basic elements of music before proceeding to the instrument. It is like how children develop their cognitive skills. Firstly, they learn how to speak the language; they start learning how to write it afterwards. Therefore, pedagogically, I believe that the students must be introduced gradually to the instrument. Nevertheless, I show the children elements of the instrument in order for them to understand how it works. At the same time, children’s natural curiosity leads them to anticipate the moment for starting play music. I strongly believe that balance is a very important aspect for especially the children. Pushing them to the right direction is a serious task and must be done with a tactful way. The tutor must be not only an instructor but more importantly a pedagogue.

The older students can be introduced immediately to the instrument; they can understand easier the basics as they can focus much easier and they can be more disciplined. Almost the same applies to adult students. The most advanced students need guidance in order to control and incorporate their musical knowledge and talent to the musical pieces effectively. It is also crucial to develop their technique substantially for succeeding performing pieces that require extended technical skills.

Each student, regardless of age and level, needs specific approach; each one is a different human being with different characteristics, skills and issues, so the teacher needs to deal with them accordingly. In my experience, it is wrong to instruct my students with the same way; instead, I must always find what they need, how I need to teach them and what specifically. Teaching is not only a challenge but also a way to improve myself not only as a tutor but also as a performer, artist and person.

StathisFrom Oscar (5/5): Had 2 months of learning with Stathis so far and the experience had been great!
I have a weak music background and I used to think that to learn piano is just to learn how to put the notes onto the keyboard. But Stathis has taught me not only how to play notes, but most importantly how to turn them into something musical. He is also able to find the learning approach that suits me.
Stathis is friendly and easy going, I find it very comfortable to learn with him. Will continue to learn with him during the rest of 4 months in Manchester
StathisFrom Yomi (4/5): Stathis has been great so far and brings superb enthusiasm to his work. Enjoying my progress
StathisFrom Aoife Mercedes (5/5): In our lessons, Stathis has really helped me to not only play with technical accuracy but more so with musicality. He's a brilliant teacher and pianist, who recognises how I can improve. I would definitely recommend him to anyone looking to develop their skills.
StathisFrom Nigel (5/5): I have now been for 2 lessons with Stathis and can highly recommend him as a teacher. He has an understanding of my approach to piano playing and how I can progress, both in a supportive and challenging way. His enthusiasm for teaching and music is evident. He makes it feel very much a two-way experience. I have been playing the piano for some years and feel privileged to have found such an excellent teacher. On top of this he is such an amiable bloke!
StathisFrom Rob (5/5): Stathis is a fantastic teacher. Lessons focus on the details of how to make pieces sound musical rather than just playing the right notes. I feel like I’ve improved a lot in a short space of time with him.

Would highly recommend to anyone considering lessons.
StathisFrom Octavian (5/5): Professional, enjoyable lessons. Stathis is a great performer and an awesome teacher who is keen on working with me on fixing my technique and developing my musicality and knowledge!
StathisFrom Dmitrii (5/5):
StathisFrom Fernando (5/5): Very friendly and enjoyable lessons. I'm really enjoying learning piano with him!
StathisFrom Stephanie (5/5): Excellent piano teacher - professional, funny, flexible, easy-going, my son likes him!
StathisFrom Tomas (5/5): Excellent teacher. Patient, flexible and makes lessons interesting.
StathisFrom Wei (5/5): Stathis is really a good teacher. Although we are not so good at English, he is patient and humorous to teach us!