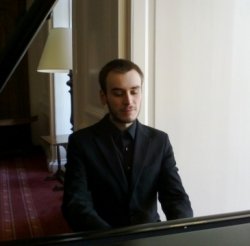 This is how 2 referees rated Sasha:

Accomplished professional pianist and academic who studied at Cambridge & GSMD, and who has lectured at Univ. of Glasgow. Teaches pianoforte, composition, classical improvisation, & music theory (all levels). Tuition available in person or online.

As a performer, I am highly experienced as a soloist, accompanist, chamber musician, and classical improviser; I am the regular pianist with the London New Wind Festival. I have experience of performing in many contexts, from informal background music to full concerts, from the theatre‐pit to the most distinguished stages, from solo recitals to concerto appearances, and chamber music. Venues at which I have performed include the Amaryllis Fleming Concert Hall (Royal College of Music, London), West Road Concert Hall (Cambridge), and the Wigmore Hall (London).

After having attained ABRSM Grade 8 whilst still at primary school, I entered the Royal College of Music Junior Department in 2003, where I studied under Emily Jeffrey and Helen Leek. I developed a diverse repertoire, from Bach and Scarlatti to my own compositions and pieces written for me by other living composers. My contribution to the performance of student compositions elicited the Constance Poupard Prize upon the conclusion of my studies there in 2010.

I then matriculated at Girton College, University of Cambridge, where I read all three parts of the Music Tripos, a broad undergraduate course with a rigorous theoretical focus: elective specialisms undertaken include Fugue (4-hour paper) and Advanced Keyboard Skills. Through my studies for the Advanced Keyboard Skills paper and my involvement with numerous concert projects, I developed proficiency in other keyboard instruments, including harpsichord, chamber organ, and harmonium. I also had the privilege of performing with the distinguished musicians associated with Girton College, including Dr Martin Ennis, Nicholas Mulroy, and Andrew Kennedy. During my undergraduate studies at Cambridge, I was awarded the Girton College Music scholarship (in 2010) and won the Alkan competition (in 2013).

I then commenced (in 2013) postgraduate studies in composition at the Guildhall School of Music & Drama, where I seized the opportunity to refine a lexicon for classical improvisation through studies in the Centre for Classical Improvisation and Creative Performance, under Prof. David Dolan and Simon Gilliver. After a year on the postgraduate Interpretation through Improvisation elective (which included a collaborative project with actors), in which I obtained a high distinction, I undertook, by invitation, a further year of advanced studies with Prof. Dolan.

Since leaving Guildhall in 2015, I have developed a thriving portfolio career, at the crux of which lies my academic research. I continue to be in demand for performing and teaching in various contexts within and beyond academia, including: giving lectures across three different courses at the University of Glasgow; accompanying examinations and auditions, often sight-reading the part; performing three world premières as a harpsichordist with the Royal Scottish National Orchestra in a chamber concert; performing as the regular pianist for the London New Wind Festival.

I am a Registered Private Teacher with the Incorporated Society of Musicians. I have experience in teaching pupils of all ages and abilities, including adults. As an academic, I have devised and delivered lectures across three courses at the University of Glasgow. As a professional performer and composer, I can teach both the practical and academic facets of music to an expert level (I also teach A-level mathematics). With over a decade of experience working with musicians of all abilities as an accompanist, I have an understanding of how to teach from a more holistic angle, in addition to the matters of technique that form the basis of instrumental teaching.

Tuition available in person or online, on a 'pay-as-you-go' basis (i.e.: I can be flexible about timeslot and frequency of lessons). Travel surcharge may apply for home visits.

Teaching is not about telling the pupil what to do: it should involve attuning him/her to perceive his/her own strengths and weaknesses, and to appreciate the demands of the music. In practice, this means that the teacher must resist the temptation to simply point out errors and immediately cite the "correct" solution; instead, the teacher must draw to the pupil's attention the erroneous matter at hand and guide him/her (with a few carefully chosen words and gestures) towards understanding for himself/herself what he/she needs to do, and why. It is my belief that a pupil learns far more by spending two minutes scrutinising an issue that the teacher has brought to his/her attention, than by being told in two seconds, "X was wrong; it should be Y".

Discipline and thorough planning are vital to making progress as a pianist. However, this should neither be taken to entail interminable scales, nor depriving performances of spontaneity. On the contrary, it is my belief that equipping a pupil with a robust technique is ultimately a means to an end: achieving a security and certitude that will enable him/her to give consistently confident and spirited performances (which may well be paratactic or even improvisatory in nature), unhampered by nerves.

Another vital attribute I try to cultivate is restraint. This entails eschewing superfluous physical motions and habits which serve only to hasten fatigue and diminish the performer’s control over the sound produced. Another facet of restraint pertains to the performer’s taste in dynamics, tempi, and articulation. The overwhelming majority of pianists, myself included, will, at some point, manifest a propensity to play excessively loud and/or excessively fast; surmounting these temptations will always be an ongoing struggle, so they need to be addressed early.

I expect my students to practise between lessons, on a decent instrument. Practice sessions need not be very long to be effective, but should be frequent (ideally, twice a day: in the morning and again in the evening).

I recommend lessons of one hour (or, for very young pupils, forty‑five minutes) — this is because my teaching method involves in‐depth examination of issues, whereby the pupil is challenged to work out and understand solutions for himself/herself (and then mark up the printed music in his/her own handwriting), a process which is necessarily more time‐consuming than simply barking instructions (which, a week later, will have been forgotten) at him/her.

Whilst I am strongly opinionated in my creative outlook and interests, it is not my aim to produce a stylistic clone in a composition student. Indeed, it is my belief that the best composition pedagogues are those whose students have gone on to embark in radically different directions from each other.

Such diversity notwithstanding, there is much to be said for cultivating a highly disciplined approach to acquiring the rudiments of writing music, entailing a rigorous and graduated study of harmony and counterpoint alongside intrinsically creative endeavours (of course, it would be simplistic and counterproductive to construe "theoretical exercise" and "creative endeavour" as mutually exclusive: many of Bach’s greatest works were theoretical experiments in the possibilities of counterpoint). Many of the most subversive and revolutionary composers possessed an encyclopaedic knowledge of music theory (most notably Schoenberg, who wrote several treatises thereon), and there is some veracity in the cliché, that "you need to know the rules before you break them".

I expect my students to draft compositions by hand; computer software may be used to prepare fair copies, once a thorough grasp of the rudiments of music engraving has been attained.

SashaFrom Giedre (5/5): Sasha is an amazing piano tutor. He has such a broad and deep knowledge base of piano music and always maintain an inspiring and motivating level of tutoring. All my 3 children enjoying the lessons and we will continue our journey of learning piano music and playing.
Thank you Sasha for an excellent service!
Reply from: Sasha: Thanks for your kind comments. It will be interesting to see and hear how the three children progress.
SashaFrom Julie (2/5):
Reply from: Sasha: Julie came to the first lesson, in late-August, telling me that she wanted her son, JC, to do ABRSM grade 4 pianoforte in the next session (November/December), despite the fact that he had not started a single piece from the relevant syllabus. I explained, diplomatically, that this would be very challenging, and suggested that we defer making a decision on the matter until the entry deadline (26th September). In the meantime, we agreed that I would work with JC on two pieces, chromatic scales, arpeggios, and aural tests -- he had another teacher (apparently JC has a high turnover of teachers -- Julie said that she had recently discontinued lessons with yet another!) for the other facets, the division of the material having, according to Julie, been suggested by this other teacher (whom I do not know, and with whom I never had the chance to communicate).

At first, things proceeded tolerably well: JC had chosen one of the pieces he wanted to cover with me, and was in the process of choosing the second (after my having played, at JC's request and at sight, some of the options in the anthology), and he was making satisfactory progress on the other facets in my remit. Unfortunately, and with very little advance warning, JC arrived 35 minutes late to his third lesson with me. Julie expected me to still give JC a full hour of teaching; I explained to JC (Julie was not with him) that I had another pupil straight after him, and that I considered it unprofessional to force subsequent pupils to wait for so long on account of JC's lateness. Julie asked (by telephone) if it would be possible for JC to come back at the end of my schedule, to which I said yes, provided that she paid for the extra time. She was not willing to accept that solution, and, moreover, decided to cancel all subsequent lessons that had been scheduled.

I have spelt out in detail this situation, trying to stick to the facts of the matter, so that you can come to your own conclusion as to whether to trust Julie's rating of me.