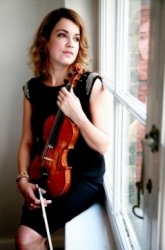 This is how 2 referees rated Romana:

Romana offers a discount of 25% on their first / introductory lesson!

Violinist Romana was born in Poznan, Poland where she studied at the Padarewski Music Academy. She than continued her musical journey at the Guildhall School of Music and Drama with Krzysztof Smietana and the Royal College of Music in class of Prof. Maciej Rakowski.

During her studies in UK Romana was a holder of Scholarship by Prof. Barry Ife, Denis and Sylvia Forbes Scholarship and Baring Foundation Award. She is very grateful for the generous support of Zetland Foundation.

She took part in many Music Festivals and Masterclasses in Europe and in the UK, having pleasure to perform in such a venues like Cadogan Hall, Royal Albert Hall, Barbican Hall, Royal Festival Hall, St Johns Smiths Square, Kings Place, St.James's Piccadilly, St.Martins in the Fields.

Romana’s family have traditionally been teachers. Since a young child Romana has always wanted to pass on her knowledge. She is also a member of Musician Union.
Throughout her learning experience both in Poland and the UK she has come to realize the importance of balance between creativity, fun and discipline.

She works with all students at all levels from beginners through to more advanced musicians. Teaching on a one to one basis through to large groups provides Romana with a great deal of satisfaction. Taking a professional approach to all tuition produces exceptional results.

RomanaFrom Elisabetta (5/5): Romana is an excellent and very patient tutor. We can already see progress in my daughter's musical abilities after only a few weeks of tutoring.

Elisabetta
Reply from: Romana: It's a pleasure to work with Alice, thank you for your lovely feedback Elisabetta.
Best wishes
Romana