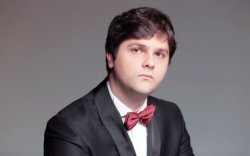 This is how 2 referees rated Maxim:

Maxim offers a discount of 50% on their first / introductory lesson!

Maxim is an award-winning international concert pianist and chamber musician who performs a wide range of repertoire from Bach to contemporary composers. Born in Moscow, he began piano lessons at the age of five, making his recital debut at the age of ten.

Awarded a scholarship, he obtained his Bachelor of Music degree with Distinction from Moscow’s Tchaikovsky Conservatoire. His teachers there included Sergei Dorensky, Nikolai Lugansky, Pavel Nersessian and Andrei Pisarev, who are his greatest musical influences.

As part of the “Moscow Conservatory Piano Quintet” Maxim won the prestigious 2017 International Sergei Taneyev Chamber Ensembles Competition in Kaluga, Russia (First Prize, Special Tatiana Gaydamovich Award and Special Moscow Tchaikovsky Conservatory Prize ‘For the best performance of a work by Taneyev’).
Moreover, he had masterclasses with Henk Guittart from the Schoenberg Quartet and Alexander Bonduriansky from the Moscow Trio.

In 2017, Maxim moved to the UK to pursue his career as a concert pianist.

He completed his Master of Music in Performance degree with Distinction in 2019 at the Royal Northern College of Music in the class of Ashley Wass, supported by a Leverhulme Arts Scholarship. After that he graduated the prestigious International Artist Diploma course there, supported by the FM Wright Piano Award.
Last year he studied with the internationally renowned pianist Kathryn Stott on the Postgraduate Diploma course at the RNCM, supported by the Anderson Powell Prize, and the Helen Rachel Mackaness Charitable Trust.
Maxim is currently continuing his professional development with Graham Scott and Dina Parakhina.

Also, he was selected as a Kirckman Concert Society Artist for 2019-20 and played his full-length solo debut at Wigmore Hall in October 2019.

In April 2020, Maxim has been named as an Artist of the Month of the Talent Unlimited Music Charity and in May won an Ian Fleming Award at the Help Musicians Postgraduate Awards.
The year after, he had a masterclass week of intense one-to-one tuition with Dame Imogen Cooper as a 2021 Imogen Cooper Music Trust Scholarship Holder and became a winner of the Robert Turnbull Piano Foundation award.

In October 2021, Maxim was invited to headline at launch concert for 2022 Hastings International Piano Concerto Competition at The White Rock Theatre in Hastings, along with the European Union Chamber Orchestra.

Maxim has been a soloist of the St Petersburg House of Music since 2012 and has performed in prestigious venues across Russia, Italy, Spain, UK, Brazil, Israel and US, including Wigmore Hall, Bridgewater Hall and the Great Hall of the Moscow Conservatoire. He has performed internationally with orchestras including the St Petersburg State Academic Symphony Orchestra, Orchestra of the Teatro Carlo Felice, Royal Philharmonic Orchestra, The Hallé and with the European Union Chamber Orchestra, among others.

Most recently, he has made his debut recording of Franck’s Symphonic Variations with the BBC Philharmonic Orchestra.

Maxim has broadcast on Italian TV channels TG2 RAI and TGVercelli, and on BBC Radio 3.

Maxim is currently working as a Piano Teacher both at Maunders School of Popular Music and at Rubato Music Centre in Manchester.
Before that, he worked for 3 years as a piano teacher and accompanist at Music School in Moscow.

He has various students of different levels and different ages, from beginners to professionals and prepare his students for various exams, concerts and competitions.
All of them get the exceptional progress.

His students have achieved a 100% ABRSM exam pass rate with many gaining merits and distinctions as well as won piano competitions around Europe.

All levels and ages starting from 6 years old are welcome to have a lesson with Maxim.

Maxim believes that all students are different and each requires a unique approach.

For example, he is teaching his adult students how to use their imagination in music and at the same time how to understand the composer's style of the executed works. But this approach does not fit the teaching of young pianists at all.

First of all, Maxim instils love of music and the piano instrument itself in them, because it is very important to find the right approach to the child, to interest him from the very beginning.

In his classes, students not only enjoy but spend time with benefits.

For him, teaching is not only the development of a student as a pianist, but it also improves him as a pianist, teacher and artist.

MaximFrom Thomas (5/5): Maxim is very knowledgeable and gets straight to the point. We've done a few lessons so far but I think his experience can help reach far quite fast which is very rewarding.
MaximFrom Winston (5/5): Superb. He has told me things about the piece I am studying that it is impossible to know without having a tutor.
MaximFrom MT (5/5): Maxim is a very great teacher. During the lessons, he is patient, passionate, and knowledgeable. With his in-depth music theory and practical background, I can learn the necessary skills and make every week’s progress easily. He is very attentive to details as well. I love his piano performance during the lesson, which is absolutely amazing!

I would definitely recommend Maxim.
MaximFrom Herman (5/5): Excellent tuition for a reasonable price. Maxim is always prompt and well prepared for lessons. A very warm and friendly teaching style yet he manages to convey the most complex of musical notions in simple terms for a 10 year old. As he is bi-lingual I can wholeheartedly recommend him to any Russian speakers in the area as well.
Thank you for your continual work and we look forward to seeing more of the same consistent improvement that we have been seeing week-by-week.
See you next time!
MaximFrom Maria (5/5): It was a very good first lesson.
Maxim was very professional and adapted his style of teaching very well to me as a student , to fit my abilities. The explanations through out the lesson were very clear and also made it more interesting, teaching to understand ‘why’ and not just ‘how’ to play.
MaximFrom Ainars (5/5): Awesome teacher, i understand the piano now. Highly recommended.