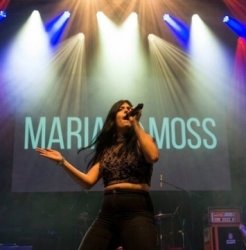 This is how 2 referees rated Maria:

Do you want to be taught by CHER's vocal/pronunciation coach and Salma Hayek's former singing teacher?

Maria H. is a versatile and multifaceted music teacher and singer-songwriter from Spain, where she toured as a professional singer since the age of 16.

Maria has been singing since a very young age. At the age of 14, she won ¨The English Key¨ prize singing ¨When You Believe¨ by Mariah Carey and Whitney Houston on Cantamania (Salou, TV3). She attended Aula Musics (Liceu of Barcelona) to study the professional degree of jazz and blues, the Conservatoire of Tarragona to study classical music, Acción-Escena School of Actors of Madrid to study a professional course of Musical Theatre and BIMM London to study BA Creative Musicianship (songwriting, singing technique, popular music, music business and production).

She has performed as an established solo artist (Maria Moss) around Spain, the UK and the USA and has collaborated with many artists, DJs and producers like the 5 Grammy producer Nacho Molino, Mark Taylor (Kylie Minogue and Enrique Iglesias's producer and songwriter) and Pete Maher (U2, The Rolling Stones and Katy Perry's engineer).

Her teaching career started when she was 10 years old (yes, it is true) as a dancing teacher for children from 4 to 18 years old. Later, she became a singing, piano and music theory teacher. Alongside performing live on a regular basis, Maria has built up more than 10 years of teaching experience. Currently, she tutors singing, keyboard, choir, LPW/band performance and music theory to children, teenagers and adults looking to develop their talent and instrument technique. She balances her teaching role with her studies, a busy performance schedule and songwriting.

Maria's songs and performances are filled with her characteristic personality and her calling for happiness, love and empowerment. Artists such as Alicia Keys, Whitney Houston, Mariah Carey, Christina Aguilera, Michael Jackson, Beyonce and Sia are a few of her inspirations.

A caring, supportive and enthusiastic team oriented professional who is committed to the education, safeguarding and promotion of pupils. Possessing confidence and creativity as well as communication and time management skills. I have the ability to encourage my students to achieve their potential learning and enjoying at the same time. I have the ability and expertise to help you develop your vocal ability, performance skills, song writing, music theory, self confidence and stage presence.

"It was definitely hardcore. Maria is a great teacher. She was adorable, a young singer from Spain. She was tough! When it was good, we'd 5-fived! Never worked so hard" - Cher