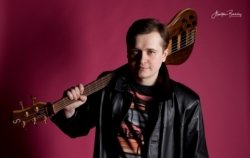 This is how 2 referees rated Lukasz:

Only four strings and such a great surge of energy!
I offer bass guitar and double bass lessons for all enthusiasts from Norwich and surrounding areas.
If you enjoy a powerful sound and low bass tones, contact me.
I will teach you how to improvise and create your own rhythmic parts. You will be able to accompany to your favorite songs and begin your musical journey - starting with pop, rock, through more complicated funk, soul, Latin music and ending up with creating complex jazz compositions. You will develop the skills you have already acquired (intermediate and advanced level), as well as you can learn to play from scratch (basic level).
I am a graduate of the Birmingham Conservatoire in a bass guitar class.
I play the 4, 5, 6 string bass guitars, fretless and double bass.

''Lukasz is a fantastic teacher, he has massive knowledge and talent. He helps you developing your technique and improve day by day. He challenges you but you will never feel that you can't overcome the challenge, even what seems hard. In just a year, with his method, (as told by people who heard me playing) I reached a level that people usually reach in 3 or more years!''

Lukasz is a graduate of the Jazz Faculty at the Birmingham Conservatoire. He is a bass guitarist who has successfully been making a name for himself on the Birmingham music scene.

His hometown hosts the Swidnik Jazz Festival where the biggest names in jazz arrive to perform, including: Tribal Tech, The Elvin Jones Jazz Machine, Jack DeJohnette with his project The Ripple Effect, Tomasz Stanko Quartet and others. From his earliest years he has had contact with jazz music at its highest, world-class level.

At the age of 14 he became interested in the bass guitar and he set his future course on training and improving his bass guitar skills. From the age of 15 he attended a secondary classical music school in a double bass class. However, he continued to be involved in jazz music and participated in jazz workshops organised in that period. There he met the Polish jazz elite (Bogdan Holownia, Artur Dutkiewicz, Janusz Szrom and others). At the age of 18 he decided to leave for Great Britain. In 2009 he began studies at the Leeds College of Music under Dave Kanes tutelage which culminated in graduation with distinctions and in 2011 he has commenced studies at the Jazz Department at the Birmingham Conservatoire in the bass guitar class. He studied under of such tutors as: Mark Hodgson, Arnie Somogyi, Fred T Baker, Jean Toussaint, Andrew Bain, Mike Williams, Jeremy Price an others. He participated in masterclasses and performances with the likes of Dave Holland, Jeff Ballard, Mark Turner, John Taylor, and George Colligan.

He also participated in the project titled Blood On The Floor composed by Mark-Anthony Turnage organised together with the Classical Department of the Birmingham Conservatoire conducted by Sian Edwards.The next important event came with the Frontiers Festival in which he participated and with the Thallein Ensemble performed In C, composed by Terry Riley, performing together with eminent representatives of British jazz (Steve Tromans, Mark Sanders and others). The band was conducted by a Nothern Irish band leader, Sid Peacock. His participation in that festival led to cooperation with Steve Tromans in his trio, Axis Point, and a series of concerts on the jazz scene of Birmingham (made a record) as well as joining the band run by Sid Peacock and Ruth Angell, Peacock Angell Band. The band recorded pieces and videos for their new project, North. They played a promotional concert on 7th November 2014 at Midlands Arts Centre.

After completing his studies in 2015, Lukasz was employed at the Warner Leisure Hotel on the Isle of Wight as a resident bass player. During the half-year contract he has gained invaluable experience in the field of music entertainment. He collaborated with a whole range of musicians associated with running this kind of artistic activity. It was a very important period for a young graduate entering a professional music career.

In 2017, Lukasz returned to Birmingham where he threw himself into the many live music scenes of this great city.

In 2019 after 2 years spent in Birmingham he relocated to Norfolk. He joined resident band at the Warner Leisure Hotel (Corton Coastal Holiday Village). Lukasz also started collaborated with Norwich based metal band Hedra. At the moment the band working on uncoming album ''Elements''.

Next project is connected to London based Hungarian guitarist and composer Victor Horwath (Vyk Aart). Both musicians are working on his self-titled EP.

My name is Lukasz and I am a bass guitar enthusiast.

My family is very musical, my grandfather and father played various instruments, hence from my early childhood I had contact with music. My attention was immediately drawn by bass guitar  the favourite instrument of my father. He gave me first lessons in playing the instrument and I took first steps under his guidance.

When I was 14 I decided to enrol at a music school to learn how to play bass guitar. Unfortunately, it was impossible in Poland as no school offered such a field. Having no other choice, I took up studies concerning double bass  the instrument which was the most similar to bass guitar. Only in the course of education I realised how different these instruments were. After playing double bass for three years, having been aware that I was not doing what really interested me, I started looking for relevant schools outside the borders of Poland. The rich history and enormous opportunities in the music market in the United Kingdom persuaded me to choose England.

I came to the United Kingdom in 2006. I wanted to become familiarised with the education system in England and see whether it differed greatly from the Polish system, thus, I decided to start from scratch. I enrolled at the Stratford Music Centre where after three months I passed the Rockschool Electric Bass Guitar Grade 8 examination with honours. Next, I took up study at the Leeds College of Music in the Field of Bass Guitar and after 2 years I was awarded the BTEC National Diploma (Jazz) with honours as well. In 2011 I began the Bmus Jazz studies in bass guitar at the Birmingham Conservatoire, Faculty of Arts, Design and Media. During the studies I had an opportunity to cooperate with many exquisite musicians from all of the world. I was nominated to represent the Conservatoire at classes and concerts with musicians such as Dave Holland, Jeff Ballard, Mark Turner and others. In the result, I gained considerable experience and could benefit from invaluable advice and tips of legendary jazzmen, musicians who in the last 40 years shaped new trends and directions in pop and jazz music. In 2015 I was the first, and the only person to date, to graduate from the Conservatoire in the Field of Bass Guitar. All previous graduates played only double bass. Consequently, I gained not only broad general knowledge of music, but also the ability to play my favourite instrument on the highest level. I play all types of bass guitars (4-, 5-, 6-string and fretless bass guitars and double bass). Furthermore, I am an expert in the field of bass equipment, i.e. instruments, amps, effects, etc.

When I completed my education I decided to use my skills in the music industry and I must admit with satisfaction that I was well-prepared to this work. In comparison with other musicians I did exceptionally well and I instantly was engaged by many bands and in music projects. Contacts with the environment of young, often novice, enthusiasts of playing bass allowed me to learn their problems. When these young, highly enthusiastic, novice bass players try to improve their skills, they frequently find incompetent teachers (guitar players, pianists) who are unable to meet the requirements set by bass guitar which importance is growing. This instrument is commonly underestimated and must be treated seriously because young people (more and more often girls) might become discouraged from playing it despite their high interest.

Every musician needs a good teacher who would prevent him or her from committing many mistakes which make it impossible to progress and lead to discouragement and losing interest in learning. A young musician who was lucky enough to meet an experienced teacher does not lose enthusiasm, quickly achieves progress which gives him satisfaction and motivation to further work. In the consequence, in the immediate future we could have an army of good, educated musicians who would quickly feed into the music market and improve the declining level of local and national bands. I believe that with my education, experience gained in the music market of Great Britain and knowledge of problems encountered by both young and matured bass players I could lead them through the complexities of the bass world and prepare them to mature and full participation in creation of the musical reality of Norfolk, and in fulfilment of personal ambitions and dreams.

''I have been a student of Lukasz' for around 11 months. I have been playing bass for about 20 years prior to my first lesson with him. My playing has transformed, not just my technique but also my sound. Lukasz' attention to every detail, from the shape of hands, to the sound of my pickups has made me rethink my approach to playing. He adapts his lesson plans to my way of learning, making each lesson different and easy. I would highly recommend Lukasz to anyone who wants to become a great bass player.''

I will teach you how to improvise and create your own rhythmic parts. You will be able to accompany to your favorite songs and begin your musical journey -
starting with pop, rock, through more complicated funk, soul, Latin music and ending up with creating complex jazz compositions.
You will develop the skills you have already acquired (intermediate and advanced level), as well as you can learn to play the from scratch (basic level).

''Lukasz is an inspiring, experienced, knowledgeable, patient and compassionate teacher. My weekly bass class with him is a highlight of my week and it makes me want to practice playing bass all the time. Classes are fun, interesting, inspiring and I feel that my progress is very fast under an expert guidance from a very knowledgeable and experienced teacher.''

LukaszFrom Agata (5/5): Łukasz is a very inspiring teacher with plenty of knowledge and experience. Classes are fun and engaging. Highly recommended!