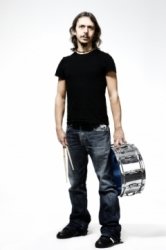 BIOGRAPHY
I was born in Turin, Italy, the year Led Zeppelin released “Physical Graffiti” considered one of their best albums. At the age of 12 I decided to dedicate my life to what kept me out of trouble and made me the man I am today: drumming.
I learned my rudiments at Jungle Music in Turin with Mario Bracco and played in the Italian circuit for 10 years performing 100s of shows with names like Raw Power, Linea77, Statuto, and this until I moved to London in 1998.
Since then I have been involved in many projects, played all around UK and in most part of Europe and USA, sharing the stage with some great musicians: Pete Doherty, Adam Ant, Deerhoof, Cardiacs, Peter Wolfe, Reuben, Skinny Man, King Prawns, E-Force (ex-VOIVOD) are just few of them.
I regularly work with few musical theatre companies whom with I performed some Off-West End theatre musical projects like: Disco Inferno, Hairspray, We Will Rock You, Heaven Sent, etc.
I recently graduated in BMus in Popular Music Performance at Tech Music School, London.
I was lucky to be taught by experienced musicians like Darryn Farrugia, Erik Stams, Adam Betts (James Taylor Quartet), Sebastiaan De Krom (Jamie Cullum) and have attended Master classes with top drummers like: Dave Weckl, Jojo Mayer, Billy Cobham and Hernandez "El Negro".


MUSICAL THEATRES LUCA HAS PERFORMED AT

• WE WILL ROCK YOU: produced by Ben Helton
• HAIRSPRAY: produced by Zadar and Meron
• UFO: music from Little Shop of Horrors, The Horror Picture Show and Evil Dead
• DISCO INFERNO: Written / Compiled Justin Sepple
• S`WONDERFUL: music of George Gershwin
• OH THE THINKS YOU CAN THINK: music of Ahrens and Flaherty
• MAGIC TO DO: music of Stephen Schwartz
• HEAVEN SENT: produced by Adam Linsson and Alex Hughes

I offer professional tailored tuition at a very competitive rate and plan the lessons according to the specific ability and interests of the pupil.

I tend to work from my own syllabus which covers the main areas of drumming: rudiments, technique, co-ordination, independence, sight-reading, improvisation and song analysis; this is supported by reference to core texts/DVDs by Dave Weckl, Jojo Mayer, Buddy Rich, Kim Plainfield, John Savage, et al. I am also happy to work with you on any particular interests you may have as well as the Trinity/Guildhall and Rockschool Grades: 1 - 8.

Lessons are normally 1 hour long but I am happy to offer sessions of any duration. I have found that pupils aged 8 and under are sometimes better suited to 30 minute sessions, whilst some adults opt for 2 hour lessons.

- An extensive study of Rock and Pop drumming

- An introduction to Gospel drumming (chops/licks)

- An introduction to Jazz drumming (Big band and small ensemble)

- Song/Solo Analysis: I will transcribe the drum parts to the songs by your favourite bands/artists and teach them to you. However difficult they may seem, the parts can always be broken down into simpler ideas before we work towards the final version.