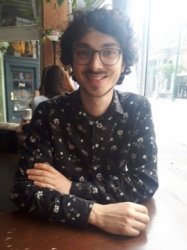 This is how 2 referees rated Leon:

I am a friendly, patient and professional Piano, Composition, Production, Music Theory and DJ teacher from London, based in Cambridge. I have 11 years of teaching experience, and have taught pupils from 5 years old to 65!

I began composition lessons with Darren Bloom at Forest School, Snaresbrook and was awarded a scholarship to the Royal Birmingham Conservatoire, followed by a place at the Conservatorium van Amsterdam, where I completed an MMus in Composition in 2019. My previous tutors include Richard Ayres, Wim Henderickx, Richard Causton, Edwin Roxburgh, Ed Bennett, Joe Cutler and Howard Skempton. I have also taken masterclasses from Rebecca Saunders, Mario Garuti, Anna Korsun and Colin Matthews.

I was the winner of the Orchestre Nouvelle Generation Composers Competition 2016/17, and the Birmingham Conservatoire Orchestral Composition Prize 2015. Distinguished ensembles and performers who have performed my works include the DoelenKwartet, HERMESensemble, Syzygy Quartet, Ossian Ensemble, Noszferatu, Decibel, David Le Page, Patrick Johnson, Sara Minelli, Rowland Sutherland and Colin Alexander. My compositions have been featured at world-famous festivals including the String Quartet Biennale Amsterdam and TROMP Percussion Festival, and at venues such as Kings Place and Muziekgebouw aan 't IJ, as well as various venues throughout Europe, North America and South Africa.

In addition to classical composition, I also write advert soundtracks on a regular basis for clients such as GHD, Lanvin, Japanese Vogue, Mariana Jungman (London Fashion Week), Nowness, Cent Magazine and Face Lace. I have completed a number of scores for award-winning short films 'Wanted' by Graeme Montgomery, and 'Genesis' by Beatrix Haxby.

I am also a bassoonist, having studied with Adam Mackenzie (New London Chamber Ensemble) and John Orford (London Sinfonietta). I was a member of Essex Youth Orchestra for four years, and have written new repertoire for the instrument including a number of Concert Studies and also a Bassoon Quartet.

I am also an active DJ under the alias 'Delian Sound', playing eclectic sets from Garage to Jungle. I studied with international artists including Kasey Riot and Noah Priddle at the London Sound Academy, have performed in venues such as SET, Dalston alongside artists including Chiminyo and D’vo, and have DJ'd on SUB FM.

In 2016 I began giving private lessons, and built up a group of over 20 pupils ranging from 5 year olds to adults through positive word-of-mouth. Between April-July 2017, I was contracted by a local primary school to give small group lessons in Piano and Guitar. Alongside my studies in Amsterdam, I continued to teach a similarly wide age range of pupils.

Since moving to Cambridge I have begun teaching at the Saffron Centre for Young Musicians, and am about to begin a teaching post at Sistema in Norwich.

I have an Enhanced DBS check, available upon request.

My philosophy in Music Tuition is to improve the student's technique through exercises and pieces which they enjoy. I also provide a general music education as I believe in a holistic approach, and increasing their passion for music which will increase their motivation for practice and improvement.

LeonFrom Sarah (5/5): Leon is a patient and easy-going tutor. He always praises my daughter and the way he pointed out mistakes is always gentle. My daughter loves Leon’s lesson. As a parent, I fully believe Leon has successfully applied his professional knowledge and artistic presentation to set up a good example, a teacher and a pianist’ image in my daughter’ s early piano journey. Leon is also very easy for me to approach to when I wanted to discuss questions regarding my daughter’s development. Being different from other strict piano tutors, Leon wins young learner’s agreement by his unique personality and characters which you rarely can find in Cambridge.
Reply from: Leon: Thank you for your kind words Sarah!
LeonFrom Nick (5/5):
LeonFrom Henriette (5/5): My teenage son had piano lessons with Leon for 2 years. He really enjoyed the lessons and learned a lot. He particularly liked the structured approach Leon taught him to tackle new pieces and the mix of technical exercises, understanding of music theory and working on a new piece in each lesson. My son wasn't working towards a particular grade, so he was able to suggest pieces he wanted to play, which really helped to keep him motivated. He now feels confident to tackle new music independently. Thanks very much for your excellent teaching, Leon!
LeonFrom Louie (5/5): Quick to respond. Organised but flexible. Perfect for our requirements. Seems a really lovely tutor who is patient and clear at explaining the grade 8 theory syllabus. I am so pleased that we found him, what a treasure!
LeonFrom Jess (5/5): Leon contacted me quickly and we have booked our first lesson
LeonFrom Richard (3/5): I have not heard from Leon. Richard Oliver
Reply from: Leon: Hi Richard,

We have already confirmed our lesson haven't we? Still all okay for tomorrow?

Leon
LeonFrom Maria (5/5): Leon contacted us promptly and arranged a date for our first lesson. Thank you