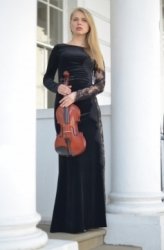 This is how 2 referees rated Katya:

Professor of violin and viola, Yuri Zhislin. In 2012 she won a scholarship from an Anatole Mines & Anthony Elt Award towards her studies at the Royal College.

Since moving to London in 2009 she has performed at a number of solo and chamber recital venues including at Wigmore Hall, King’s Place, the Orangery in Holland Park, Beck Theatre, Bridewell Theatre, St. John’s and St. Peter’s Church in Notting Hill, St. Alfege Church in Greenwich, All Saints Church in Kingston, Guildhall School of Music and Drama; and at various festivals including “The Little Proms”, the “Earl’s Court Festival”, and with the “Schnittke” string trio in the Netherlands.

She is a member of various London orchestras, such as “I Maestri”, “London Chamber Players”, ”Arcadia Mundi’’, “Firebird” and “Russian Virtuosi of Europe”, performing at such places as Cadogan Hall, St. John’s Smith Square, St. George’s Hanover Square, St. Paul’s Covent Garden, Royal Festival Hall and St. Giles-in-the Fields Church… She also played with “Melos Orchestra”, “London Art Orchestra” and “London Arte Chamber orchestra”. In early 2013 took part in a co-principal bursary scheme at the Rehearsal Orchestra and performed solo with the “Tudor Orchestra”, conducted by Owen Leech. In 2011, Katya played as a soloist with the “I Maestri” orchestra, conducted by Krzysztof Chorzelski, in St. Mattheus Church. In 2012 she toured to South America with the Russian Virtuosi of Music chamber orchestra.

From 2010 she studied at the Guildhall School of Music and Drama (GSMD) where she was generously awarded a full scholarship by the Guildhall School Trust, and a full academic year scholarship by the Leverhulme Trust. While studying at GSMD, Katya took part in a number of orchestral and opera projects, including with members of the London Symphony Orchestra. In 2012, Katya was awarded a Master’s of Music degree in Orchestral Performance.

Katya has taken part in master classes with such outstanding viola-players as Yuri Bashmet, Yuko Inoue, and Yuri Zhislin. She has also performed in orchestras conducted by such renowned conductors as Colin Davis, James Gaffigan and James Judd. In 2010-2013 she was a student of the professor and member of the Belcea quartet, Krzysztof Chorzelski as well as of the professor and Artistic Director of the Russian Virtuosi of Europe chamber orchestra, Yuri Zhislin. She has attended the Lake District Summer Music Academy and had lessons with Yuko Inoue, Garfield Jackson and the Chilingirian Quartet.

Katya began her musical training at the Republican Musical College at the Belarus State Academy of Music with T.P. Bodneva and then with Prof. L.L. Lastovka at the Belarusian State Academy of Music. Between 2003 and 2007, Katya was a laureate of the E. Kohu, International Music competition in Chisinau, Moldova. In 2004 she won second place at the International Competition for Strings in Kiev, Ukraine.

In 2009 Katya won 3rd prize with her quartet at the International Chamber of Music competition in Smarghon, Belarus. Katya actively took part in the cultural life of her country performing as a soloist with the Belarusian Philarmonia and as a member of the philharmonic soloists’ ensemble “Classic Avangarde”. She frequently played as a soloist with the State Chamber Orchestra of the Republic of Belarus and with the student chamber orchestra at the Belarusian Academy of Music, including at Barcelona. In 2004, Katya won an exhibition from a special president fund for the support of talented youth.

From 2004 until 2009 Katya was a student of the Chamber Music Summer School “Musica Mundi” in Belgium, where she had lessons with members of the “Kuss” and “Talich” quartets.

Katya plays viola made by luthier Luis Claudio Manfio in 2012.

Teaching all grades and all levels. Trying to make lessons more fun and compelling for the students.

- ABRSM and Trinity exam preparation for all grades.
- Helping to prepare for concerts, auditions and competitions. I have rich performance experience on various stages.

KatyaFrom Jhon (5/5): My wife loves the way Katya is tutoring her with the violin, very professional.
KatyaFrom Xiaoqian (5/5): Katya is a very professional and challenging teacher. My daughters have improved their skills a lot and enjoy the lessons with her.
KatyaFrom Esther (5/5): Thank you so much for helping our daughter get ready for her exam. She enjoyed her lessons with you and made wonderful progress that week… she ended up getting a distinction too which was just fantastic! Thank you again, Best Wishes.
KatyaFrom Patrick (5/5): Katya has a great approach to lessons

She is clearly very accomplished in her own playing and shares her insights in the form of focused advice.
Her lesson was challenging and she gave excellent messages.

she is a first rate player and teacher