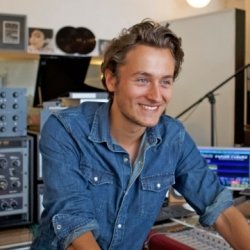 This is how 4 referees rated Jan Willem:

Jan Willem offers a discount of 50% on their first / introductory lesson!

Jan Willem is an award-winning film composer, producer and musician currently based in London. His soundtracks and film productions have been internationally screened and performed at film festivals and events in Cannes, London, New York, Prague, Cologne and Zurich. For some of his productions, he has collaborated with musicians and ensembles such as "The City Of Prague Philharmonic Orchestra”, “Budapest Scoring Symphonic Orchestra”, “State Orchestra Halle", and Eurovision singer-songwriter Chiara Dubey. These collaborations have led to work in locations such as Abbey Road Studios London, Air-Edel Studio London and Smecky Studios Prague.

Jan Willem´s musical career started at the early age of five by giving concerts and taking professional music lessons. He was involved in several musical projects, events, bands, choirs, as musician, conductor, singer and actor. Early on, composing and conducting became an important output of his creative work. After starting a two year apprenticeship as a church-musician and choir-conductor at the age of 14, he conducted several choirs and performed his music and arrangements. Besides school, he went to the University for Music and Theatre Hamburg where he were studying composition and orchestration with Prof. Dr Wolfgang Andreas Schultz (former student of György Ligeti).

Jan Willem first received nationwide attention in the German TV composition competition “Dein Song” by KIKA/ZDF in 2014 where he was selected to be one of 16 finalists to perform his composition in live TV.

Through public and private masterclasse as well as composition and orchestration workshops, Jan Willem learned alongside professionals as such as Balz Bachmann, Marcel Vaid, Benjamin Köthe. In 2014, he was awarded a young talent scholarship by the German film foundation “Nordmedia" for “Media Sound Hamburg” where he could learn from composers as such as Javier Navarette, Oliviere Deriviere, Chris Huelsbeck or Lisle Moore.

One of his most important achievements so far was receiving the “German Film Music Award” in the category “Best Music For Short-Film 2016” for his music to the animation movie “Little Infinity”.

Jan Willem studied film music and composition at several Schools and Conservatoires such as the School Of Entertainment and Technology (apprenticeship as a composer for media) and Zurich University Of Arts (Bachelor in Composition for Film, Theatre and Media) with professors as such as Niki Reiser, Peter Scherer, Rodolphe Schacher, Till Löffler, Benjamin Lang, André Bellmont, Matthias Steinauer. He finished his master degree in “Composition for Screen” with distinction at the Royal College Of Music in London (professors: Vasco Hexel, Enrica Sciandrone, Ken Hesketh, Francis Shaw, Gilbert Nouno) for which he was awarded a german talent scholarship by “DAAD” (“Deutscher Akademischer Auslandsdienst”). Here, he came also in contact with film composers as such as George Fenton, Michael Giacchino and Harry Gregson-Williams during college intern masterclasses.

As a conductor his main focus is on film scores. Most recently he conducted the Wuppertal Symphonic Orchestra (who worked with Composers such as Hans Zimmer) for a live-to-picture film music concert.

Besides composition, Jan Willem is working as a lecturer for film music at London South Bank University, festivals and congresses (as such as the Medienforum Mittweida or Lüneburg Short-Film Festival IM.KASTEN) to develop young filmmakers understanding about the use of sound and music, as well as the collaborative aspects and demands in film productions.

In my lessons, you have the possibility to learn all steps of music creation (from music history and theory to dramaturgy and conception, from composition/arrangement and producing "mock-ups" to performance and production).

In my composition lessons, you can choose between working on your pieces or on technique based composition assignments. I will provide you with feedback as well as the right composition/orchestration tools and skills to either improve your work or to extend your musical horizon. Music is subjective which is why I am interested in developing and getting to know your "voice" in music.

My Music Theory lessons are a mixture of theoretical inputs and ear training assignments Hereby, I want to skill your ability to listen, understand, and analyze music and strengthen it with theoretical knowledge.

If you are interested in getting an insight "behind the screen" in my work as a film composer,
I give you the possibility to be a fly on the wall in my recording sessions or if you qualify maybe even to assist from time to time.

I am looking forward to getting to know you.
Please don´t hesitate to ask if there are any questions and have a look at my homepage for more information:

Jan WillemFrom Susan (5/5): Jan is an excellent tutor. He completely understands our son's needs and the positive difference is evident from day 1. He supports all aspects of the music production diploma and provides expert advice and guidance. He has a really positive relationship with our son. He provides detailed feedback. We now feel confident our son will do well, during lock-down and beyond. We are completely happy with the tutoring. Highly recommended.