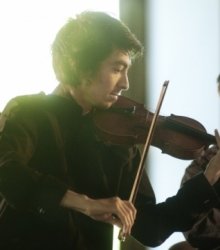 This is how 2 referees rated Hugh:

Hugh offers a discount of 50% on their first / introductory lesson!

Hugh ’s musical development began in Watford where he was introduced to a wealth of musical experiences at a young age. He has especially fond memories of playing in numerous orchestras which helped to cultivate a team-spirited approach to performance. The happy combination of study at Watford Grammar School for Boys and the Royal Academy of Music, Junior Dept, led to the decision to read music at the University of Leeds where he continued to relish various roles of responsibility. Particular highlights include performing Prokofiev Violin Concerto No. 2 with the LUUMS Chamber Orchestra, conducting the LUUMS Symphony Orchestra for two years, and playing with LS2, a contemporary music ensemble. During an Erasmus Exchange year at the Conservatoire de Region de Strasbourg Hugh enjoyed working with a diverse range of chamber groups which ignited a passion for music-making on a smaller scale.

Hugh completed his MMus degree with distinction at the RNCM in 2011 earning The Roger Raphael Prize. He learnt with Thelma Handy and Yuri Torchinski, and has since taken inspiration from Maciej Rakowski. During his time at the college he led the Concert and Symphony Orchestras in numerous projects. A particular highlight was a leadership role in the RNCM String Ensemble tour to China. He received regular chamber music coaching from a broad range of institutions including an ECMA session in Lithuania, the International Academy of String Quartets Aldeburgh, Kings Place ChamberStudio, and Music Works. Until recently Hugh enjoyed playing principal of the Florian Quartet performing regularly throughout the UK.

Hugh has experience teaching pupils of all ages from youngsters aged 5-6, to mature students. Recently he taught violin and music theory at Fulneck School in both group and individual lessons. He has experience directing orchestras and teaching conducting.

I believe in tailoring my teaching according to the needs of each individual student in order to inspire self-confidence, musicianship, and creativity. I have been brought up through an array of techniques including the Suzuki Method and ABRSM Exams, and have been exposed to a variety of approaches having had Russian, French, Albanian, and English teachers. This has made me aware that a successful technique is one that is flexible and approached with an open mind.

Technical studies that I have found to be successful in the past include Cevcik, Mazas, Dont, Kreutzer, Rode, and Carl Flesch.

HughFrom Alex (5/5): Infinitely patient, insightful and very adaptable. He has a real passion for music and has an amazing way of humoring older learners with the more nuanced and theoretical questions while making sure you stay focused on what's important for your development.
Reply from: Hugh: Very kind of you Alex. It’s a pleasure teaching you and I’m sure you’ll go far!
HughFrom Jenny (5/5): Our daughter asked to learn to play the violin and so having read her all of the tutors 'overviews', she picked Hugh and I cannot fault her choice. He is both kind and patient and clearly very talented. Our daughter, despite her shyness, really enjoys the lessons. I would not hesitate to recommend him as he encourages our daughters love of learning.
Reply from: Hugh: Thank you for your kind words! She is a real joy to teach.