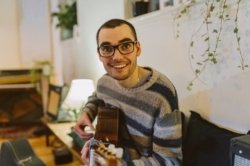 This is how 2 referees rated Henry:

I am a passionate musician and educator - I have just completed an MA in Music Composition and Production, and lecture in popular music performance and composition at BIMM, Manchester. I am currently studying for an FLCM in acoustic guitar, as well as a PGCert in Further and Higher Education. I teach songwriting, music production and guitar.

If you have song ideas you need help developing, need guidance using a Digital Audio Workstation like Logic Pro X or Ableton, or want help getting your songs to a point where they sound finished and release-ready, I can help. I have released five solo studio albums to increasing critical acclaim. My fourth album ‘A Ghost Inside’ , which I self-produced, was released in September 2021. The first single 'Seinfeld Street' catapulted my profile on Spotify, taking me to over 10,000 monthly listeners in July 2021.

During my undergraduate degree, I specialised in songwriting and composition, writing music for myself as an artist, for other artists, for Film and TV, installations and other projects. I was awarded an exemplary first for my final portfolio of compositions, and was awarded the conservatoire prize for popular music in my second year, and for songwriting in my third year. I was invited to many songwriting camps around Europe, writing songs with other students for various artists and labels. At the International Writer’s Camp in Haarlem in 2017, our group’s song was pitched to the German artist Alle Farben. One another camp in Pescara in 2018, I helped to facilitate songwriting collaborations between eight songwriting students from around Europe, and three Nigerian men who were refugees from their own country.

With such a broad experience of music composition and production, I can help you improve your songwriting and production skills, regardless of the styles or genres you are interested in working in.

I teach all styles of guitar. I am a virtuoso classical and acoustic guitarist. When I took my Grade 8 exam, I was awarded an Exhibition Award from Trinity Guildhall for the highest mark of that exam season. I am a specialist in contemporary fingerstyle guitar styles. I was awarded full marks for my final A Level recital in which I performed music by the acoustic guitar virtuoso Michael Hedges. I am currently preparing for a Fellowship Diploma in acoustic guitar. I also teach electric guitar and improvisation at BIMM, Manchester.

I have performed with numerous bands around the UK. My own band 'The Henry Band' has had several incarnations and has performed sell-out headline shows as well as high profile support slots for artists such as Canadian Joey Landreth, and UK Songsmith Sam Brookes. I also perform as a solo act, doing many of my own shows, but also private functions such as weddings and hotel gigs.

Since graduating from my BA (Hons) at Leeds Conservatoire in 2018, I have gained a wealth of teaching experience with pupils of all ages and am about to start studying for a PGCert in Further and Higher Education. Most recently, I have been working as a visiting or guest lecturer in songwriting and popular music at Leeds Conservatoire, Hull University and Leeds Arts University. Over the last four years, I have worked around West Yorkshire in secondary and primary schools, music centres, client’s homes, from my own home, and online, teaching predominantly guitar, songwriting/composition and ukulele. This has included tuition for one to one students as well as small groups. Through my work at the music service Musica Kirklees, I taught whole class ensembles too - in several schools I taught music to year three and four, writing and delivering my own scheme of work. I also ran large-scale ensembles for Musica as part of their music centres, such as songwriting collectives, ukulele bands and classical guitar orchestras for which I would provide original compositions and arrangements and lead at local performances and regional competitions.

As an experienced teacher, I understand the impact that those in teaching roles can have on changing the status quo around diversity and representation. In all of my work, I am aware of trying to create democratic environments in which all students feel able to share ideas and feedback. I try to be aware of anybody present who is perhaps, due to their gender, sexuality, or ethnic background, lacking in confidence and losing their voice in a session.

I enjoy immersing myself in the cultures and musical tastes of the students I work with. I am aware that the vast majority of the music I listen to is created by white men, and want to ensure that reference points I provide in my teaching are not only helpful and inspiring, but also representative of the students I am working with.