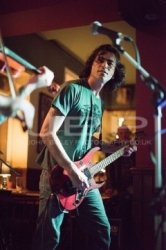 This is how 3 referees rated Hector:

Hector offers a discount of 50% on their first / introductory lesson!

It’s been 20 years now since Hector hit the road as a professional lead guitarist. One of the most tight and technically gifted guitar players in contemporary Brazilian rock, he adds up to a staggering mastery of scales, modes and chord progression, the hot emotional metrics of his playing. Hector boasts an impressive career in the brazilian rock scene. His experience goes from accompanying great singers in tours, playing with several rock and Brazilian Popular Music (MPB), bands in night clubs and elaborate partnerships in concerts and recordings with great Brazilian musicians such as Ricky Furlani, Wander Taffo, Netinho (Os Incríveis), John Favicchia (NY drummer), Alaor Neves etc.
His first instrumental authoral album, Kosmo Dimensio, shows 9 pieces all composed by Hector. Launched in 2006, it was warmly welcomed by his fans and praised by brazilian and international rock music media. Boasting a unique personal style of composing, Hector mixes in his guitar heavy rock and progressive rock thus creating miriads of amazing climates and atmospheres.
In 2009 Hector launches his first printed electric guitar method Bars, tuplets and polyrythm. Filling up a gap in the Brazilian musical marketplace where no information on the subjet can be found by electric guitar players. The method approaches many rythmic concepts, ranging from the basic principles of rythm and its subdivisions up to odd bars and lots of tuplets.
Also in 2009 joins the progressive rock group Yvory Gates. They release in 2011 The Devil’s Dance and the album is acclaimed by specialized critics worlldwide (Brazil, Europe, the US and elsewhere) as a great prog metal work. It was among the Top Ten list in the **Web Address Removed** site, Brasilian #1 rock website, as best 2011 albums. Fans were in the hundreds (thousands?) to attend concerts performed to promote it, in Sao Paulo, Campinas, Piracicaba and other cities.
In 2011 Hector is invited to take part in the Rock Rhapsody show, a partnership between rock and the classical music. Formed by the classical ensemble Ternamente Eclético, composed by Cecilia Bellato on the piano, Álvaro Damasio on acoustic bass, Luiz Fernando Dutra on violin and Débora Batista on vocals. Rock Rhapsody added to it two electric guitars (Hector and José Fernando Freitas) and drums, with Roggero Chiarinelli. Concerts were performed at the main halls in Piracicaba, always for the benefit of Associação Ilumina, a support group for people with cancer. In the 14th April 2012 they had to make two consecutive sessions for tickets sold out soon after being released, wich caused the 2nd session.

Now in 2014 Hector is launching his second personal album Love and Pain. After eight years from the release of Kosmo Dimensio, this new work shows a more mature set of compositions, presenting remarkable melodies and keeping the unique traits of music making already present in his previous work. The title track is a song from Netinho, drummer of the Brazilian outstanding rock band Os Incríveis together with Hector.
In september 2014 Hector move to England to start a new life and establish himself as a musician in UK. Just a couple of months after his arrive he does an audition to Eat the Rich band, and fortunately get the job. It’s such a pleasure to him play with this incredible and unique band.
In january 2015 he got his Rock Guitar Grade 8 certificate, from the University of West London - London College of Music Examinations, passed with distinction.

Piracicaba, were Hector was born and has lived in, is the world’s mecca of sugar cane production and processing. Thanks to the wealth sugar and ethanol provide, Piracicaba is proud of its intense cultural life and excellent music schools. He took full advantage of that rich environment, starting his musical studies at the age of eight. Always a brilliant classical and rock guitar student, Hector has acquired not only amazing dexterity but also a deep knoledge over classical music, there included, notation, tempo, harmony, all that allows him to write his own music as much as perform written stuff from great sources among wich Joe Satriani, Steve Vai and Dream Theater.A graduate mechanical engineer, Hector abandoned an almost complete master degree in agricultural machinery to dedicate himself to music in 2002. Since then he combines actvities in music research and performance with the task of teaching: he runned his own music school, “Tempo 1”, where he and other highly skilled professionals teached guitar as well as bass, singing, drums, violin and much more.
An outstanding feature of Hector's work is the charity concert The Instruments Speak Up. Led by Hector, this important social work has been an occasion for the presentation of new experiments in instrumental rock music and the appearance of scores of local rock performers. It has taken place from 1999 to 2007, and overall has contributed to the collection of more than 2.5 tonnes of food supplies destined to poor people in Piracicaba ( SP / Brazil ).

Second full-length album of Hector's portfolio, Love & Pain brings up 9 brand new pieces. It’s undoubtedly his top job. The album was produced by Hector and Claudio Sanches Vicente, and recorded between 2008 e 2013 at the Groovie, , Haick and Favicchia's Studios. All songs were composed by Heitor and performed by him on all guitars (acoustic and electric) and bass on two tracks. We also had Marcos Dellamatrice and Fernando Defavari on the bass and Fabricio Félix, Fábio Rodrigues, and the stars drummers John Favicchia (NY drummer) and Luiz Franco Thomaz (Netinho), from a very well know 50's Brazilian band called "Os Incríveis".

With many years experienced teaching the guitar, Hector knows about the student’s needs and the most common weaknesses of the music learners.
His lessons cover since basic fundamental aspects of guitar playing, until the highest level players, that wants to develop their style. Other important aspect of the guitar playing is gear. It's also well covered by the lessons, and some recording, mixing and producing basics as well.

HectorFrom Jarrad (5/5): Exactly what i was looking for, the level of music knowledge from Hector is incredible. No questions un answersed. Fun friendly lessons! 5*
HectorFrom Rachel (5/5): Hector is an inspiration and makes learning the Guitar really fun!

You are such a great student, very enthusiastic, focus and open to learn.

Cheers !!!
HectorFrom Peter (5/5): Hector is a superb tutor. Although I have only had a couple of lessons so far, he has given me the confidence to progress further. He is very friendly and has loads of patience. Highly recommended.
Reply from: Hector: Thanks Peter. In fact, you are doing very well. A lot of progress in a short period of time. It's just keep doing what you always say to me: Practice, practice, practice !!!