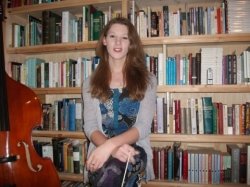 This is how 2 referees rated Georgie Vivienne:

My name is Georgie . I am a doctor of Word and Music Studies (Aberystwyth University, 2016) with considerable experience as both a performer and a teacher.

In 2011 I graduated from Bangor University as a Bachelor of Arts (First Class Hons) in Music and Creative Writing. My studies during the course of this degree included modules in Teaching Techniques, Solo Performance (voice), Conducting, Composition, Palestrina and the Renaissance Madrigal, The Study of Music, Mendelssohn, and Poetry and Performance. The dissertations/final year projects that I completed included an analysis and study in the field of Word and Music Studies with particular emphasis upon the operettas of Gilbert and Sullivan, and a religious choral sequence based upon texts from the book of Revelation.

Vocally, I have studied under several instructors including Swingle Singer David Morris, Dr Alex Jarrett and the Welsh opera singer Marian Bryfdir. I achieved grade 8 in 2008 with the ABRSM and, as previously mentioned used my vocal studies as a major part of my degree.

For the academic year beginning in October 2013 I served as conductor and musical director for Aberystwyth’s Elizabethan Madrigal Singers (Cantorion Madrigalau Elisabethaidd), for whom I focussed on creating varied programmes of early music and madrigals in honour of the groups roots, in combination with contemporary compositions including new works by young composers (such as Poon Ying Wai’s ‘Light’). Also during this time I was involved in a collaborative Ty Cerdd commission for an a cappella ballet, the first movement of which I performed as a soloist at the Narberth A Cappella Festival alongside Pembrokeshire choir, Tempus.

As an instrumentalist I have played the Double Bass for Aberystwyth’s Philomusica, B.U. Symphony Orchestra, B.U. MuSoc Orchestra, B.U. String Ensemble, and B.U. Early Music Ensemble amongst other scratch ensembles. For all of these ensembles I served as section leader for at least one year. I have also performed with groups such as the early music ensemble Fantasticus and have served as a session musician playing for musicals, operettas and choral concerts.

Amongst my most memorable performances, due to their difference from my normal work or style, have been a live performance of Neil Brand’s film score to Hitchcock’s ‘Blackmail’, and singing in a backing choir for Florence and the Machine.

My other interests include poetry and horse riding (occasionally, but not always, at the same time).

From February 2013 I held the post of Private Singing Tutor and Vocal Coach at Aberystwyth Arts Centre. As a teacher I have worked with a wide array of pupils of varying ages and abilities and with different objectives. These have included experienced, older singers adjusting to their changing vocal registers or preparing for competitions, children and novices eager to begin their vocal journeys, choristers in need of assistance with learning complex harmonies, and academics hoping to gain confidence and vocal dexterity for use in public speaking amongst many others.

I use tools and techniques drawn from my own classical training to aid individuals in a wide variety of styles and genres. The interests, requirements and vocal styles of my past pupils have been so far flung as to include the following disparate forms:
- Folk
- Earth-Music Channelling
- Christian Hymns
- Heavy Metal
- Pop
- Musical Theatre
- Disney
- Rock
- Choral Works
- Operetta
- Plainchant/Monastic Chant
- Jazz
- Solo (classical)
- Speech Production

My training includes ABRSM grades in Voice, Music Theory and Double Bass, alongside my specific University degrees in the field. In terms of specific areas of study, I directed much of my training into Word and Music Studies specialising in vocal performance, vocal composition and early vocal music, alongside taking modules in Music Tuition and Conducting (musical leadership). Whilst in Bangor and Aberystwyth I also had several Double Bass pupils. These included beginner musicians, music students with experience on other classical instruments, and bass guitarists.

My teaching experience is not exclusively orientated towards music. I served for several years as a University seminar tutor in English and Creative Writing and have recently been visiting Primary Schools in the Leicestershire area delivering workshops on ‘Heritage Heroes’, Local History, Creative Writing, Poetry, and ‘Values’. I am particularly interested in finding new ways to engage children in order to improve their English and literacy skills.

I believe that in order to create the best learning experience for the individual, when teaching one must adjust one’s approach to suit the learning style of the particular tutee. As such, I begin every programme of study with an informal chat to learn about my new pupil’s past musical experience and to discuss their goals, objectives and hopes for future achievement. These goals we revisit at strategic moments during the course of study to help students to recognise their development and to establish new targets.

I believe that music should be enjoyable. I originally turned to singing teaching upon hearing a number of the members of my parish church declare that although they enjoyed singing they weren’t comfortable doing so because they had been told as children that they lacked musical ability or had been accused by teachers of deliberately singing out of tune. Since that time they had been too afraid to let their voices sound out. This knowledge shocked me. To tackle this issue I set up a singing summer school and together we gained the confidence to perform several times in three and four parts, both a cappella and with piano accompaniment.

My classes generally consist of a combination of technical exercises and studies alongside the use of carefully selected repertoire targeted towards improving specific areas of concern. I believe in creating an engaging, encouraging environment in which I can work in partnership with the pupil to help them learn at a rate which is appropriate for them as an individual.

Voice, instrumental and theory lessons may be booked in slots of 30 or 60 minutes. For young children 20 minute lessons are also available where appropriate.