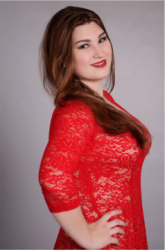 This is how 3 referees rated Evgeniya:

Professional Opera and pop music Singer with over 18 years experience on a professional stage.

I am able to travel to any part of London and provide coaching in the following specialties:

I provide individual approach according to student's age, needs and goals.
Learning progresses with studying variety of vocal exercises, advice on repertoire, correct techniques, posture and gestures, and also work on stage presentation if required. I have a very high attention to details and voice anatomy knowledge to make sure my students are aware of vocal techniques and also of performance health and safety.

I am also working with professional RAM pianist Guy Murgatroyd, so I am able to arrange a highly qualified accompanist for my student's performances and exams when necessary.