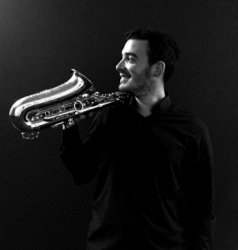 This is how 2 referees rated Diogo:

Born in Setúbal, Portugal, Diogo commenced his musical studies at the age of ten at the Conservatório Regional de Setúbal (Portugal), from which he was awarded Grade 8 in saxophone.
He also has a vast field of working in an orchestral setting, since 2010 I have been doing a lot of internships, such as the 3rd Internship of Palmela Wind Band (Palmela/Setúbal/Portugal), in April 2010; the Wind Orchestra Internship of the Metropolitan School (Lisbon/Portugal), in April 2011; the 5th Symphony Orchestra Festival Art & Cult (Figueira da Foz/Portugal), in July 2012; the 2nd Edition LisbonFilmOrchestra (Valada do Ribatejo/Portugal), in March 2013; the Grand Union Orchestra (Oundle/United Kingdom), in August 2014 and the 1st Internship of the "Ensemble" Symphony Orchestra (Fátima / Portugal), in September 2014, among others.
In 2014, Diogo was accepted for undergraduate studies at ESART (‘Escola Superior de Artes Aplicadas’) in Castelo Branco, Portugal, under the tuition of Carlos Canhoto. For his final recital at ESART, Diogo received an outstanding classification of 18 marks (out of 20).
Back in Portugal, Diogo participated in several masterclasses with names such as Claude Delangle, Mario Marzi, Henk Van Twillert, José Massarrão, James Houlik, Artur Mendes, António Felipe Belijar, Alexandre Doisy, Hélder Alves, Albert Julià, Jean-Yves Fourmeau, João Pedro Silva Nicolas Prost, Otis Murphy, Michel Supera, Jerome Laran, Fernando Ramos and Timothy McAllister.
Diogo finished his Master's Degree in Music Performance at the Royal Welsh College of Music & Drama, under the tuition of Gerard McChrystal.
In 2018 Diogo was awarded the May Edwards Prize for Music and in 2019 his quartet "Alaw Saxophone Quartet" was awarded with the Woodwind Plus Ensemble Prize from the Royal Welsh College of Music & Drama.

During my time at ESART (Escola Superior de Artes Aplicadas) in Portugal, I also had the opportunity to gain teaching experience at a music school in Castelo Branco for two years. I found that this teaching project was very important to me, not only on the instrumental and technical side but also on the personal side.
Recently in the United Kingdom, I have been developing my teaching work and experience at the Royal Welsh College of Music & Drama in Cardiff since September 2017, with several students obtaining great results in ABRSM Graded examinations.
Currently working full time at the Cardiff Sixth Form College as a saxophone teacher and teaching privately as well.

As a music teacher, I have thought about and worked hard to develop methods and approaches for working with my students. My firm belief is that one size does not fit all, and while the goals and results are often clear the way to get there is personal and individual. I tailor my lessons to and with my clients in mind - because I care. This personalised approach is married to good quality instruction, ensuring that the basics are taught correctly and with the student's age, style, goals and capacity being considered. I work hard to provide this. I am also open to feedback, clarification, and change in order to get the balance right and encourage an open discourse with our students and student’s parents about this.