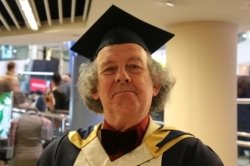 This is how 2 referees rated David:

I studied at the Royal College of Music during the years 1970-73,
studying double bass, arranging and conducting. During this time I also formed the R.C.M. big band, ran college
discos, played in light music concerts, as well as working in
folk and jazz clubs in my spare time, together with recording
sessions.
As well as working in all styles of music, I have been a music journalist since
1980, writing on all aspects of music, including instrument reviews.

MUSIC.
I have worked in a wide variety of musical fields, including the
following:

Folk:- over sixty different acts and groups over the years.

I have acted in an advisory capacity to schools and colleges in
Hertfordshire, Hereford & Worcester, Warwickshire and University
College, Dublin on recording and music technology syllabus
matters.
From 1990-92, I lectured at Kidderminster College of
Further Education in their Music Technology Department, lecturing
in sound recording for the Audio Visual Studies department;
lecturing in recording technology and production techniques,
performance techniques, and jazz studies, all as part of the BTEC
course in performing arts.
In 1993, I was a member of the validation committee for The
University of Westminster's BA(Hons) degree course in Commercial
Music.
I was a Music Technology Lecturer at Hereford Sixth Form College from
‘96-99. I also conducted the college big band- in my last two years we toured
both Holland and the Czech republic, and have taught double bass at Hereford
Cathedral School from 1990 to the present.

From 1998-2004 and 2008-2010 I was an assistant examiner for Edexcel
in A level Music Technology papers covering both sequencing and
recording.

I lectured part time at Worcester Tech, lecturing in B/TEC ND &
HND Music Technology from 1999-2001, and I lectured in City & Guilds Sound
Engineering Parts 1,2 & 3 at the School of Sound at Hereford College of Technology.
I have coached the bass section of the National Schools Symphony Orchestra on their summer courses since 2004.

I currently teach double bass and bass guitar. I have taught at Hereford Cathedral School (1990-2016) ,Malvern St. James -previously Malvern Girl’s College (2005-16), Malvern College -where I also coached college rock bands- (2002-12), and King’s School Worcester (2012-16). I have played in productions for Malvern and Hereford Amateur Operatic Societies and as well as Hereford Pantos. I run my studio from home, compose, arrange and record music, and play classical and jazz gigs whenever possible. I led the bass section of the Chandos Symphony Orchestra from1990-2015.
I play 5 string double bass, and 4, 5 and 6 string fretted and fretless bass guitars.

My current private pupils have ranged in age from 8 years old to 64 years old. My pupils range from complete beginners to Grade 8 plus. I am fully CRB checked.

There's never been a better time to learn to play an instrument: the choice, range and pricesd have never been better and the ewducational material is light years on from what was available whewn I was at Music College.
I specialise in explaining things as clearly as possible to students, so that there's no room for confusion, and take a long term appraocg to teaching. Playing an instrument will last you your entire life, and you never stop learning and growing as a musician. Above all, it should be fun and can take you to new and exciting places!