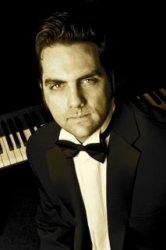 This is how 2 referees rated Daniel:

With a classical piano background in his teens, Daniel started his professional musical journey in his 20s whilst living and working in Switzerland. Developing as a Jazz Pianist and Blues singer (separately), Daniel studied jazz at EJMA and toured as a singer with a number of Swiss bands who performed regularly at Blues, Jazz and Rock festivals in France, Switzerland, Germany and Italy. Alongside a passion for Jazz and Blues, Daniel’s operatic and musical theatre styles have seen him perform on a variety of stages across the UK and Europe where he has performed as Elvis (Geneva, Switzerland), Freddie Mercury (Frankfurt, Germany) and as a lead Italian tenor in a London production of “Lend me a Tenor”.

After three years as pianist/singer on various Cruise Ships, Daniel returned to London in 2010 to quickly be selected as Musical Director of events and resident pianist at Caffe Concerto, The Ivy and The RAC Club. Alongside London-based residencies and events, Daniel has made festival performances at Bestival, Wireless Hyde Park and Somerset House as well as guest artist appearances at CAA (Club for Acts and Actors), Pizza Express (Chelsea and Soho), The Savoy (Beaufort), Piano Bar, Toulouse Lautrec, Piano Works, Bassoon Bar, New Players Theatre, Cafe de Paris, Ronnie Scott’s and The Phoenix Arts Club.

Daniel has been teaching in NW London for the last 12 years, during which time he has helped students gain entry and music scholarships to Sylvia Young, St Marylebone’s, Haberdasher’s and Stagecoach. During his tenure as Musical Director of Caffe Concerto, Daniel worked with X-Factor, BGT and The Voice to scout, promote, accompany and direct new talent… In adult education, Daniel has also worked as a coach and educator for pianists and singers – some of whom have achieved success with Music School Scholarships, Musical Theatre roles and TV Talent Shows. As a songwriter, Daniel has collaborated with a vast array of producers including Queen’s former producer David Richards, as well as working with fresh talent – some of whom started as his singing pupils in their teens.

As a musical allrounder, who enjoys classical, jazz, musical theatre and contemporary music, my first priority is for the student to love what they do. Therefore, instead of focussing purely on classical or graded pieces, I try and encourage the student to play some of the music they like, eg. pop / Disney / musical theatre. However, due to my sincere love for Chopin, Mozart, Beethoven, Debussy, I do try and impress the importance of proper study to achieve the finer things in life.