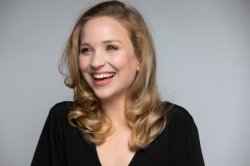 This is how 2 referees rated Corinne:

Australian/American soprano Corinne has performed Christine Daaé (1st cover) in The Phantom of the Opera on London's West End, Anne Egerman in A Little Night Music at Leeds Playhouse, and Morgana (cover) in Handel's Alcina with Opera North. Corinne has performed in major concert halls across the UK and Istanbul including the Barbican Concert Hall, Royal Festival Hall, Birmingham Symphony Hall and Glasgow Royal Concert Hall with Raymond Gubbay’s Johann Strauss Gala National Tour for seasons 2017, 2018 and 2019 alongside tenor Nicky Spence and under the baton of conductor John Rigby.

Corinne recently graduated from the Masters of Music in Vocal Performance with Distinction at the Guildhall School of Music and Drama, London UK, under the guidance of Professor Susan McCulloch. Whilst at Guildhall Corinne was selected as a finalist for the Chartered Surveryors Prize, the English Song Prize and performed in public masterclasses with Mark Padmore, Janice Watson, Amanda Roocroft and Rudolf Piernay. She was awarded first place in the Franz-Schubert-Institut Competition, receiving a scholarship for the 2016 Franz-Schubert-Institut Master Course in Baden Bei Wien, Austria. Corinne made her Wigmore Hall debut collaborating with members of The Prince Consort, Stephen Hough and selected Guildhall students on Stephen Hough’s own composition ‘Other Love Songs’. She was also selected to be part of Graham Johnson’s Song Guild and the Semi-Chorus for Elgar’s The Dream of Gerontius with the London Symphony Orchestra at the Barbican Concert Hall, conducted by Sir Mark Elder.

Prior to her studies in London, Corinne graduated with a Bachelor of Music and Graduate Diploma in Classical Voice at the Western Australian Academy of Performing Arts where she studied with Patricia Price and Linda Barcan. She took part in the WAAPA International Art Song Festival in both 2014 and 2015, working closely with Graham Johnson OBE, Deborah Birnbaum and Mary King. Corinne also completed a Certificate II in Musical Theatre at WAAPA in 2008 and was a member of Youth Ballet WA. In 2009 she studied in the Diploma of Dance program at the Koninklijk Conservatorium, Den Haag, The Netherlands, under the guidance of Christopher Powney and Wim Broeckx. Throughout her studies in Den Haag she had the opportunity to perform across The Netherlands for the 2009 Holland Dance Festival.

Awards include third place in the 2017 Patricia Routledge National English Song Competition and a finalist at the 2017 Bampton Opera Young Singers’ Competition. The Guildhall School of Music and Drama Award at the Finals of the 2014 IFAC Australian Singing Competition, as well as the Clark & Associates Prize, the Universal Music Australia Prize and the WAAPA International Art Song Festival Prize. First place in Art Song Perth’s 2014 Evelyn and Ralph Thompson Memorial Scholarship and the 2013 Dame Mary Gilmore Award for the most promising overall final year female student in Classical Voice at WAAPA.
Corinne was the recipient of The Rosaleen McFie Osborn Award, the Sheila White Award, and the Erika Burgell Legacy Award at the Guildhall School of Music and Drama. She is also generously supported by the Drake Calleja Trust, Ian Potter Cultural Trust, the Marten Bequest Travelling Scholarship and the Golden Key International Honour Society.

I have a decade of voice teaching experience in my private studio in both Perth, Western Australia, and London, UK.
I have also taught voice and music in schools such as Be Training Programme, The Vocal Coaches, The Sing Space, The Little London Music School, Lucy Sparkles, Charlesworth Institute and Hampstead Music School.

Corinne is an Australian soprano highly trained in Classical Voice (BMus, GradDip, MMus) and Musical Theatre (CertII) and Classical Ballet (CertIII) which informs her teaching approach for students of all levels. She has a comprehensive approach to each student. All students learn in different ways and come from different backgrounds and experiences. Corinne makes sure that she addresses the specific needs of each individual student and adjusts her approach according to what each singer needs whilst regularly addressing the fundamentals of vocal technique. Her main focus is improving breath co-ordination, breath support and body awareness for efficient, healthy and economical vocal production.

Corinne is offering voice lessons online via her website **Web Address Removed** - click on the "Sing With Corinne" link and book a consultation lesson if this is your first lesson with Corinne.

A personal letter from Corinne:

"I specialise in classical vocal technique and use this as a basis for all vocal genres. I address breath, vocal range, head/chest voice, intonation, resonance, vocal health and musicianship.
I have extensive training and performance experience in musical theatre and opera, working professionally in both Australia and the UK. I have enjoyed nine years of teaching in my private studio in Perth, Western Australia, and here in London, UK. I have helped my students achieve successful auditions into the London Contemporary Voices Choir, Western Australian Symphony Orchestra Chorus as well as preparation for University/Conservatory entrance auditions.

One of my greatest passions is teaching and although my focus is a healthy vocal technique I will always encourage my students to enjoy the process. I really look forward to hearing from you and helping you on your singing journey!"