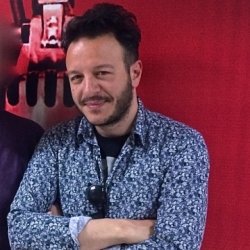 This is how 2 referees rated Christos:

Christos is a professional Musician, Composer & Producer. Has performed in many studio album recordings & live performances and also ON AIR @ BBC Radio, Tv shows etc. Has Composed & Produced lots of full length albums LPs, EPs Singles and instrumentals, music for Films,Theatre & Tv. His music-projects are & have been broadcasted in radios in the UK, USA, Canada, S.Africa, Greece, France and other EU's radio stations and received great reviews from the press internationally & entered the Top 10 & Top 20 Radio Charts as long as Spotify top tracks in many playlists.

Christos’s short Bio:
Christos graduated with distinction from National Conservatory of Athens (Ethniko Odeio) in 2005 while he finished his degree in Psychology (4 years) in School of Philosophy at University of Athens. In the same time he was following the London College of Music Advanced Grated Examinations in Music Performance – Electric Guitar and achieved distinction in Grade 8 (2003-2006). He trained in singing under Louisa Barry, Margarita Syngeniotou in Athens and Louise Gibbs in Leeds, UK (2006-2013). Christos trained in composition, counterpoint and fugue by Composer Stavros Katirtzoglou (2005-2008) and in modern composition (Schoenberg, Hindemith, etc.) by Composer Nikos Panagiotakis (2007-2008). In 2008 he went in the UK to do his Master’s Degree in Music Production/Composition at Leeds College of Music. He was supervised by Dr. Mark Marrington, Dr. Randall Whittaker & mentored by Composer Max Wilson and achieved distinction in MA in Music Production/Composition.

Christos started writing & producing songs in Greece at 2004. In the same time he started composing music for modern ensembles (trios, quartets etc.). He composed his first orchestral piece in 2006 and kept building his portfolio of compositions. In 2009 started composing music for films and exploring new musical fields and also experimenting with new sounds & styles.
He begun composing music and writing songs for Coral Caves ‘Labyrinth’s Path’ album in 2009, which he also produced and released in June 2010. BBC Radio interviewed him also amongst other radio stations, broadcasted and reviewed ‘Labyrinth’s Path’ as ‘Absolutely Brilliant!‘(BBC Radio: 17/6/10). Coral Caves’ debut has been reviewed in UK, GREECE & USA. In 15/3/12 he produced and released under CPS Records the new Coral Caves EP Album ‘Sometimes Shine’ which made a break through in Radios’ playlists in the USA and also broadcasted in the UK & GREECE. ‘Sometimes Shine’ also received very positive reviews (see review page) from magazines, blogs etc. in the UK, GREECE & USA where also listeners voted it as their favourite. In April 2013 initiated ‘C-Drain‘ project as his alter-ego and kick-started by ‘So What?’ a track very different in mood and style from what he had been known for up until then. Continued with summer-single ‘Oh Miami!’ which received great reviews from the critics in the US & UK and broadcasted by various radio stations in the US, UK, South Africa, Canada, Greece, Turkey etc. and in Canada entered the Top 40 Radio Charts in No#9 on August ’14.

In December 2016 he released as C-DRAIN the ‘Covers Unplugged’ EP album under CPS-Records featuring evocative re-workings of five of his favourite songs, and introducing a new ‘cinematic’ approach to production and performance. The EP received great reviews and entered the TOP 6 Albums of 2016 (English) and the TOP 20 of all 2016 Album-releases (ERT Radio). In October 2017 he released under CPS-Records his new Album on CD a Theatrical Soundtrack that he composed & produced the music & performed/sang on for ‘A mad man’s diary’ play by Lou Xsoun & especially 7 tracks/songs for 7 poems of Edgar Allan Poe, Emily Dickinson & Dimitris Zougos. Also performs his work live @ central Theatre Scene in Athens ‘Argo’ with loops etc singing & playing and interacting on stage with the actors. He received great reviews and also was a really great surprise to see his new songs n Emilly Dickinson’s poems – on Emily Dickinson’s official sites in the USA with many re-shares & many many good comments on – one really exceptional by Dickinson’s family member – Kandice Dickinson: ‘it is very evident (your inspiration) in the way that you set her words, Christos, enhancing their meaning, which is not an easy thing to do as a composer – bravo!’

At present, Christos is working on variant projects from folk and ambient to pop, rock, indie and music for films and theatre as composer, producer and writer. Also he is recording, producing and writing songs for other bands, singers and artists mostly in his home studio in London and in Athens. He finished his next EP Album as ‘C-DRAIN‘ with new band members which released in 2018 and performing in central live scenes with his band also combining performances with unique art-video-projections creating atmospheric and pop-art driven videos behind the stage, which are projected from video walls to castle-walls and entire buildings. In 2019 he released as C-DRAIN two new Singles, which also received great reviews & radio plays internationally.
––––––––––– Kind words from people who have worked with Christos:

“Christos is an interesting and talented artist with a clear vision of his music -his style reminds me of a cross between Leonard Cohen and Nick Cave! A pleasure to work with.”
October 16, 2011 – Barkley McKay, Owner, Valley Wood Studio  worked with Christos at Coral Caves album.

“Christos is a very discerning client. Someone who commands respect through his mastery of his art. I would recommend Christos to deliver a product on time and equalling the passion of the client he works for. Dedication is his forte.”
May 28, 2010 – Russ Hepworth-Sawyer, Mastering engineer, Owner – MOTTO Sound Company, UK.

**Web Address Removed** (Manchester): ‘…you don’t want the song to end.’ - for single Round N’ Round

Vents Magazine: Indie-rocker C-DRAIN is the alter-ego of versatile musician, songwriter and producer Christos … The punkish slice of indie is driven by choppy new wave guitar riffs, raw garage-pop vocals… fuelled by a passion for independence and DIY spirit he is a European version of shape-shifting garage-rock auteurs like Ty Segall and Ezra Furman.

Vinylmine (GR): A pleasant EP by C-Drain is the ‘No Plumbing Business’ - an artist who knows how to write cool pop songs!

Music **Web Address Removed** (USA): Rating: 9/10 “…C-Drain’s debut single ‘So What?’ is just the sort of musical break from the misery we need. And that is the key to what makes a good pop song – it fits the moment. And ‘So What?’ does indeed fit the moment…so, go on…listen to “So What?” It will cheer you up guaranteed!”

No TiTle magazine (UK): “…If this artist continues to unearth interesting influences and a variety of angles his future album would certainly create a few welcome debates…”

Music **Web Address Removed** (USA): Rating: 9,5/10 – “Producer/artist Christos resurfaces with his latest track “Oh Miami!”Blending modern rock with continuing West Coast retro pop theme, he switches coasts, pens an ode and paints a vivid portrait of the Southern Florida party city. Mixing tinges of reggae as a clever nod to its proximity to the Caribbean, this could be the metropolis’ next theme song!”

AltRockIsDead Radio (USA): “Interesting stats on Coral Caves’ ‘Shine’, we’ve played it 75 times, of those listeners who rated it, it’s rated 4 out of 5 stars, no drops, great work!!”

Jumbo Records (UK): “Local heroes Coral Caves walk the lines between lush, touching songwriting ala Echo And The Bunnymen and a slightly dark and gothic take on indie…Needless to say this 3 track E.P. is well worth checking out…”

**Web Address Removed** (GRE): “…overall we are dealing with a flawless presentation that if anything left speechless at the professionalism…’Sometimes’ with subcutaneous blues…flirts heavily with Pink Floyd-economic tradition…to overemphasize the beautiful psychedelic parts…”

With 20 years teaching experience in well-established institutions & conservatories and in private, very strong studio and live performance experience, broadcast repertoire and substantial composition/production portfolio I’m confident that I posses all the experience & dexterity to be your Tutor and start or continue with me this amazing experience of music learning!

Whether you’d like to learn your favourite tunes, sight-read, develop your technique in lead / rhythm playing in Rock, Pop, Indie, Funk, Blues, Jazz etc… take the London College’s RGT, Rockschool or ABRCM Grades (1-8). Also learn Music Theory simply & clearly approached (without headaches afterwards) & apply it into practice and/or learn songwriting techniques & music production/composition, I will show you everything you’ll need to know through the route you choose to follow with a modern approach to teaching and into practice. We live in the 2020's and music knowledge & teaching methods must meet the new requirements & needs that this new era offers us!

Michele C. (Guitar student): ‘Christos is a great teacher with an engaging and practical approach to teaching guitar. Every lesson introduces something new with a focus on maintaining a sense of progress and fun. Highly recommended!’ Rated Christos with : 5/5

* Elissey P. (El.Guitar & Theory student) : 'I really enjoy my guitar lessons with Christos. This is because the way Christos teaches is very enjoyable and he explains things very well. In the lessons when we do songwriting he is extremely helpful and goes into extreme detail on how to do things. Overall lessons with Christos are very entertaining and educational at the same time.' Rated Christos with : 5/5.

* Tom W. (El. Guitar student) : Christos is a great guitar teacher, he is always challenging me and is helping me to progress to the next level as a guitar player. Rated Christos with : 5/5.

* Remy L. (Guitar & Theory student) :
'Christos is a great teacher and easy to connect with. His classes are fun and he teaches me alot of different styles of music.' Rating: 5/5

* Anastasia F. (Guitar student, Germany) - Rated Christos: 5/5: 'Christos is a great teacher and very patient! I enjoy my skype lessons with him and feel like I am progressing well. I can recommend him to anyone who wants to learn to play the guitar… ' Rated Christos with : 5/5.

* Online Lessons via Skype- 1st lesson FREE!
Feel free to message me with any questions you may have!