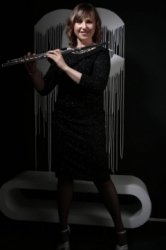 This is how 2 referees rated Amy:

Flautist, Clarinettist and Saxophonist Amy is a multi-award-winning musician based in Northamptonshire, UK.
Over the past 10 years, Amy has been regularly placed in the in the annual British Jazz Awards, winning the Rising Star Category in both 2009 and 2011, then topping the Miscellaneous category for her flute playing in 2015.
Amy has earned an enviable reputation throughout the UK and Europe as a charismatic performer, and has had the privilege to tour with some of the worlds best musicians.
After growing up in South-West Cornwall, Amy moved to Manchester to study classical saxophone with Rob Buckland at the prestigious Royal Northern College of Music. In July 2011 she graduated with a First Class Honours Degree. During her college life Amy was featured with the RNCM Big Band performing the Artie Shaw Clarinet Concerto, was awarded the Martyn Edwards Bursary (a scholarship for outstanding jazz performance) and was selected as the only woodwind student to perform in the finals of the RNCM Gold Medal Competition - the highest level competition at the college.

During Amy’s final year at the RNCM she was head hunted by internationally acclaimed trombonist Chris Barber to join his band and in doing so became the first female musician in the history of the band. With the Big Chris Barber Band she toured throughout Europe for almost 4 years before moving on at the end of 2014 to focus on her own projects. Some highlights include a 3 day stint at Dunluce Castle in Northern Ireland as the support act for Van Morrison and his band, playing on live TV in Germany and getting to perform in some of the most stunning concert halls in Europe.

In 2016 Amy was invited to play flute as part of Grammy Award Winner Terence Blanchard’s band “The Inner City Ensemble” as part of their UK tour. In the same year she was part of a special band put together to support the incredible talent Alex Vargas, an R&B Soul singer from Los Angeles, USA during his trip to the UK.

With the Matthew Herbert Brexit Big Band Amy has performed at the North Sea Jazz Festival in Rotterdam, in Antwerp, Flakey, and at the world famous Montreux Jazz Festival in Switzerland . She was also selected by American banjoist Cynthia Sayer to be part of her International All-Star Band “The Women of the World” during their Scandinavian tour in 2017.

In September 2017, the Amy /John Hallam Band were voted "Band of the Year" by Rochdale Jazz Society, a title previously won with the Amy /Richard Exall Quintet in 2014.

Amy has performed with Issie Barrett's all female Contemporary Jazz Dectet “Interchange” for performances at the London Jazz Festival and the Cambridge International Jazz Festival.

During 2018 Amy was part of the Rosenau Sinfonia during a tour to Southern Spain. They performed the "Hollywood to Broadway" show for a prestigious charity event in Sotogrande.

Amy was honoured to be featured and used as a 'cover girl' for a Clarinet and Saxophone Society Magazine after being interviewed by upcoming writer and musician William Upton. She has been a featured artist in JazzWise, PhoneBox, Lady, Just Jazz Magazines and various newspapers, as well as taking part in interviews on several regional BBC radio stations, PlayjazzUK, Harrow Radio and RadioNeneValley.

Amy is delighted to share her musical world both as a performing multi-instrumentalist and as a touring musician in a predominantly 'man's' world. She is happy to work with community, school and U3A groups and tailor talks and musical experiences to specific and special occasions.

2019 was a musically fabulous year and Amy had to opportunity to cruise with SAGA to Cape Town as part of the Syd Lawrence Orchestra, then sail on another SAGA trip to Norway with the Pasadena Roof Orchestra.

She felt privileged to be invited to play the flute at the Bristol International Jazz Festival as part of the orchestra performing Billie Holiday’s “Lady in Satin” album with very special guest vocalist China Moses.

A real highlight of the year were gigs at Manchester Jazz Festival, Hull Music Festival and in Hamburg, Germany, with the Super Big Tramp Band featuring Super Tramp legend John Helliwell. It’s such an exciting project which is soon to record it’s debut album and will be touring Europe and Canada in the not too distant future!

In July 2019 Amy was absolutely blown away to be welcomed back to the Royal Northern College of Music to perform as a guest with the RNCM Big Band during Mike Hall’s final concert as Head of Jazz Studies. It was a really inspiring experience!

The latest project for Amy is a solo flute album which is due for release in 2020.

She has been part of the Best Of Young Jazz Project in **Telephone Number Removed** 012 and 2013, as a mentor for young people in the Worcestershire area. During the scheme Amy has worked alongside phenomenal bass player and educator Steve Berry, to inspire and teach the students taking part in the BoYJ academy. She has also been involved in educating young saxophonists in Anglesey during their Summer Residential Course in 2011 and 2012.
Amy offers tuition on flute, clarinet and saxophones via Zoom, Skype, Facetime or any other video calling platform.

All abilities and ages welcome!

Making music fun is what is really important, with a keen emphasis on playing by ear as well as from music. We learn theory alongside the practical element for a greater all round understanding of music.
Students are encouraged to perform in a groups/ensembles between lessons to learn to art of teamwork, and to enjoy the social aspect of playing with others.

AmyFrom Annette (5/5):
AmyFrom Lesley (5/5): Amy, I just wanted to say that you have helped this older, very late starter no end! You have helped to build my confidence, always encouraging and affirming while also keeping me up to the mark! I am enjoying my lessons, my practice, my playing! Thank you.
Lesley
AmyFrom Ed (5/5): Yes I've made contact with Amy and had my first lesson it was a wonderful experience and I look forward to further lessons.
AmyFrom Sarah (5/5): Amy is so obviously a talented and pationate musician and this really comes across in her wonderful lessons.
AmyFrom Jo (5/5): Definitely recommend. Really friendly and has so much knowledge
AmyFrom Frank (5/5): Relaxed, cheerful. I am a complete beginner but Amy has patiently encouraged and corrected me. I am making progress as a result.
AmyFrom Martin (5/5): I am amazed at how much I have learnt in 3 weeks. Amy is a really relaxed teacher with great patience
AmyFrom Wendy (5/5): Amy is friendly and flexible in her approach to teaching and has a lovely and encouraging way about her. Thank you Amy!
AmyFrom David (5/5): Very friendly and knowledgeable. Will be back