Beyond the Western musical tradition 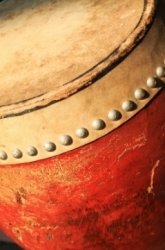 What do baroque classics, death metal, lounge jazz, opera and hip hop have in common? They're all part of the western musical tradition, and as such use the same note frequencies, scales, forms and chords.

The musical system that everyone knows, and nearly everyone receives tuition in, is in fact just one facet of humanity's rich tradition of music-making. Admittedly it is the dominant one in the world today, and by far the most pervasive, but it is still only part of the picture.

Its origins lie firmly in medieval Europe. After a gestation period where religious chanting and plainsong mixed with secular music, the advent of the printing press enabled dissemination of musical forms across the continent. Musical diversity exploded when the Baroque period started (c.1600 CE), and evolved over the following centuries.

European colonialism facilitated the mixing of the European musical tradition with those from other parts of the world. The most important of these admixtures was that of European and African-American music, which formed the basis for all nineteenth and twentieth century popular music: from smoky jazz and hard rock to the most saccharine of pop tunes. Equally, similar mixing dynamics led to the creation of Latin American dance music styles and lesser known music cultures and traditions worldwide.

As we can see, European colonialism has had a strong hand in forming the current conception of what constitutes "music", both in the creation of new styles and the dissemination of a worldwide musical tradition.

Yet, had history gone in another direction, our idea of what music "is" may be radically different. The entire Asian continent abounds with diverse musical traditions, all structured in a fundamentally different way from the Western style. Indian music, another tradition that grew out of religious worship, breaks each octave down into 12 semitones just like Western music, but each semitone is set at a different frequency than its Western counterpart, making the notes it uses fundamentally different. The tradition is also strongly monophonic (there are no harmonies), and focuses on the repetition of ragas, or short melodic sequences.

Chinese music, on the other hand, is based around the pentatonic scale and is once again melodic, instead of harmonic. Chinese singing differs critically from Western singing in that it is usually sung in falsetto or at least a high, non-resonant voice, and is never performed chorally.

A core component of Islam (and hence Middle Eastern culture), is the adhan, the "call to prayer" performed by the muezzin. While it isn't perceived as music, rather a recitation of the Koran, its melodious nature is undeniable. There are no set melodies or tunes associated with the adhan, or specific keys it has to be sung in: each muezzin has the freedom to perform the lines as he sees fit. A lot of pitch shifting is involved, some of the notes sung lie between conventional semitones, leading to a beautiful, sonorous, haunting sound. One of life's exquisite pleasures is to hear a Middle Eastern city come alive with music before the five daily prayers, particularly before maghrib, the prayer at sunset.

The rest of the world is equally diverse. The native peoples of northern Australia developed the digeridoo, a wind instrument played most effectively through circular breathing, that produces an incredibly deep, vibrating note. Due to the digeridoo's irregular shape, the wood vibrates at non-harmonic frequencies, lending an atonal quality to the sound.

A core component of hip hop, one of the most popular genres of pop music today, is rapping. Rapping's origins lie firmly in sub-Saharan Africa, where it stemmed from a rhythmic form of oral storytelling. In West Africa, performers of such stories were griots, who would memorise incredibly long poems and stories and perform them flawlessly by memory, and also be expected to ad-lib about current events and passing moments. It is conjectured by classicists that Western oral storytelling tradition (the skill of which has long since died out in Europe), may have had a similar rhythmic bent, meaning ancient stories like the Iliad or the Odyssey may have originally been rapped! An interesting implication of this is that rapping has been a prime delivery method of oral traditions for millennia, and may be as old as humanity itself.

As such, First Tutors: Music doesn't just cater to students wishing to learn music within the European tradition: you'll be surprised at the diversity of some of the instruments and styles our tutors offer tuition in!