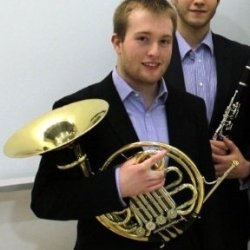 This is how 2 referees rated Peter:

I began playing the piano at the age of 4, and when I was 7 I started learning the French horn and joined the choir of Guildford Cathedral, where I later became Head Chorister. Between 2009 and 2011, I was a member of the National Youth Orchestra of Great Britain, with whom I performed at the BBC Proms series as well as several other leading venues across the United Kingdom. I have held the position of principal horn at numerous ensembles, including the York Musical Society, Surrey County Youth Orchestra (with whom I toured around the UK and several European countries), the RGS Chamber Orchestra and Big Band, the University of York Symphony Orchestra, Baroque Ensemble, Chamber Orchestra, The Chimera Ensemble, Concert Band and Sinfonietta. I was also principal horn for York Minster's 2016 41-show run of the Mystery Plays, and have performed with the University Choir and Chamber Choir, as well as smaller ensembles for one-to-a-part singing, an MA recital group consisting of 16 singers and The 24.

Alongside my ensemble commitments, I am also the winner of several solo awards at both school and county levels, including reaching the final of the RGS Musician of the Year competition for 3 years, winning the Godalming Solo Brass Class, and achieving a Distinction in the Godalming Concerto Class.

In 2016, I graduated from the University of York with First Class Honours (with Distinction) in Music. In 2015, I was awarded the Edd Burrell Prize for demonstrating outstanding enthusiasm, promise and achievement, particularly in the area of performance. For my final recital, I received one of the highest marks awarded in the year-group. My final year major project, creating the soundtrack for 'The Evolution of Madagascar' and an accompanying dissertation, was given a mark of 100% – for the first time in the history of the Department of Music. The film has since been recognised in the Official Selection for the Wildlife Conservation Film Festival in New York 2016. In January 2018, I will graduate from the MA course in Music Production at York with Distinction. I was fortunate enough to be awarded a YuFund scholarship under a very competitive university-wide award scheme for Masters students to support my studies.

My teaching experience began in 2009 when I began teaching the French horn, with pupils at beginner and intermediate levels. In 2010, as part of a work experience programme, I worked at Lanesborough Preparatory School as a teaching assistant in the Department of Music, where I helped to organise their school musical, assisted and supervised students during lessons and gave educational talks about the history and practicalities of the French horn, amongst other duties.

In 2013 I worked at St Thomas Choir School, a specialist music school in New York. Amongst my responsibilities was the supervision of the pupils at this specialist music school during their music practices, and helping them to be as efficient as possible during the practice sessions. I was also responsible for supervising homework sessions, as well as assisting at bedtimes. In addition to the musical aspects of this job, I also helped the Sports Department, and was in charge of certain sports sessions.

My learning was most effective in a fun, encouraging environment as a pupil. When combined with well-planned and appropriately paced sessions, music lessons can create the perfect surroundings for pupils to be creative and, ultimately, succeed in their goals.

Both as a soloist and as a member of numerous ensembles, I have first-hand experience of the hard work required to achieve these goals. I understand the pressures of fitting regular musical commitments around academic work and family life, and can offer advice to students as to how to best balance their schedules and create reasonable timetables which work for them.

I have a strong working knowledge of both solo and orchestral repertoire, and have achieved excellent marks in both Trinity College London and ABRSM examinations. I hope to be able to pass on my experiences and knowledge to young, emerging musical talents.