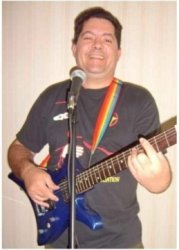 Work Experience: I emigrated to Brazil in 1987 where I worked as a hotel receptionist, an English teacher at the “Cultura Inglesa” English School (British Council) and an export analyst at a local jeans factory. I opted for self-employment in my last ten years as a private English, French and Music teacher, translator, entrepreneur, interpreter and part-time professional singer and guitarist. I returned to England in May 2001 and worked for ASDA stores at the Brighton Marina for six months, carrying out general duties on the shop floor, in the warehouse and on the tills.
In August 2002, I joined Seeboard Energy as a customer service advisor in the Change of Supply Department. After a year I transferred to the Contract Processing Department where I helped to update the company’s Foreign Language Speakers page on the intranet. Since then I have worked as an inputter in the error management team and, more recently, have added many forms of non customer-facing error management tasks to my daily activities.
Skills:
Computer –
I have an extensive knowledge of computers and the following word processing, image editing, digital audio studio and web design programs:
Microsoft Office Suite (including Word, Excel, Powerpoint, Outlook and Front Page), 602 Office Suite, Ability Office, Easy Office, SuperJPG, Paint Shop Pro, 2020, XN View, Image Forge, Encore score editor, Cakewalk Pro Audio, Evolution Audio Pro, Wavelab, Gold Wave, Sound Forge, Cool Edit 96, Quartz Audio Master, Quartz Studio Pro, Band-in-a-Box, MusicMatch Jukebox, WinGroove, Mozart, Anvil Studio, Arachnophilia, Easy Html, Home Site, Hot Metal, HTML Builder, Max's Html Beauty, Mercury Editor and Netscape Composer.
Languages –
I am a native speaker of English and Portuguese. I speak French fluently, and have a basic knowledge of Spanish, German and Japanese. I was offered a placement for a year from Oct. 1984 at the Sorbonne (Paris 1, Panthéon) but was unable to attend owing to ongoing neurophysiological and other medical problems, having suffered a brain haemorrhage in June 1981.

Music - I taught guitar and singing in Fortaleza, Brazil privately for over seven years, sang in various groups, university and company choirs, teaching sight reading and singing technique when requested by my choirmasters, finally going on to form my own octet, which I conducted, taught and in which I sang both as second bass and as baritone soloist.

Tailored specifically to each individual's or group's needs, easy-going and relaxed but expecting dedication, effort and sustained input and interaction from my students.