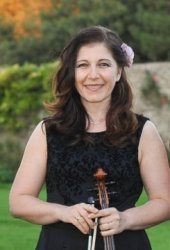 This is how 2 referees rated Oana:

I live in Enfield, North London

I have experience teaching a range of ages from young children to retirement age, beginners to advanced level. I always have a custom approach of teaching style and technique, which suits better the personality of the tutee in order to enjoy the learning process.
I also teach Music Theory.

One to one lesson. Although I was classically trained, I can play and teach a wide range of styles, which can make the lessons more fun and interesting, approaching various repertoire. Also I can include, occasionally, chamber music lessons with my students.
For people interested to take further their musical studies and would like to take exams, we will focus mostly on the repertoire requested for the exam.

"No one has ever regretted picking up an instrument and learning how to play music. EVER :)"

PLEASE STATE YOUR AVAILABILITY WHEN YOU PLACE YOUR ENQUIRY !

OanaFrom Osman (5/5): Having recently deciding to finally take piano lessons Oana has been incredible in every aspect.
Her patience and simple process to teaching is very comforting. Oana has a passion for music which is demonstrated in the lessons.
So happy to have someone who enjoys to teach with such enthusiasm.
Reply from: Oana: Thank you for your kind thoughts Osman. Much Appreciated.
I'm pleased to have met you and work together. You are an A+ student and easy to work with. I'm happy you enjoy the lessons.
OanaFrom Behnam (5/5): She is absolutely professional tutor I have ever had so far.
Reply from: Oana: Thank you Behnam
That's very kind of you. Is a big compliment coming from you as you already are a good violin player. I'm sure we can do wonderful things together and I look forward to achieve greater things together.
OanaFrom Shabana (5/5): My daughter is really progressing with Oana and is enjoying her piano classes. She started recently and has gained so much confidence in her own abilities!
Reply from: Oana: Thank you for your kind review. I'm happy with the progress she's made in such a short time since we have started the lessons together and to see she enjoys the learning process. Lola is a lovely talented girl and is very easy and pleasant to work with her.
OanaFrom Monica (5/5):
Reply from: Oana: Thank you Monica
OanaFrom Nicholas (5/5): Oana is an excellent and helpful teacher. Ideal regardless of your circumstances.
Reply from: Oana: Thank you for your kind feedback Nicholas. Much appreciated.
OanaFrom Amy (5/5): Currently learning from Oana and i couldnt be happier. Very professional and knows her stuff! Really looking forward to my journey of learning the violin
OanaFrom Vas (5/5): Nice lady, knowledgeable and patient, at least for the my 7 year old son.
OanaFrom Pamela (5/5): Very good, professional teacher. Passionate and keen to help you do your best.
Reply from: Oana: Thank you Pamela. That's very kind of you.
I hope you had a nice holiday. I look forward to seeing you soon :)
OanaFrom Georgia (5/5): Oana is a wonderful!
Would recommend to her anyone interested in learning about music be it as a serious undertaking or as a leisure activity.
She is passionate, understanding, kind, generous and patient.