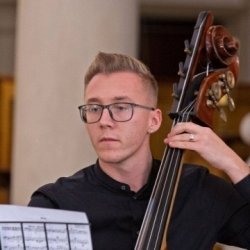 This is how 2 referees rated Lewis:

Born in Suffolk, Lewis Braham began playing the bass at the age of fifteen.

He is a graduate from the Royal College of Music in London and studied with Tony Hougham, the Principal Double Bass of the Orchestra of the Royal Opera House, Covent Garden.

Lewis is an experienced session player, he has played in recording sessions at Abbey Road Studios, Angel Studios and Metropolis Studios. He has recorded for the ABRSM, Rick Wakeman, Joanna Forest and Omar Pendrini. Whilst studying he was also in demand within the Royal College of Music, recording new works by its student composers.

Lewis was selected to record the Double Bass backing tracks for the ABRSM’s new Initial Double Bass Exam Pack for 2020 – 2023 which was is designed to help beginners measure their progress and celebrate their achievements.

In 2015 Lewis premiered 'Leaving St Kilda' a piece composed for him by renowned bassist David Heyes. Leaving St Kilda depicts the last few days and the evacuation of the island St. Kilda in the 1930's after centuries of inhabitation.

As well as teaching, Lewis tutors on orchestral courses including the NLMS Music Summer School and the Musicale Summer Course in Cambridge where he co-directed the main orchestra and conducted the string orchestra in 2018.

I teach from beginner to advanced whether just playing for fun or for graded exams/diplomas. I use technique books to ensure all of my students acquire the highest technique possible. I cover the whole Double Bass repertoire (solo, chamber and orchestral) covering all aspects of playing to develop a strong secure player.