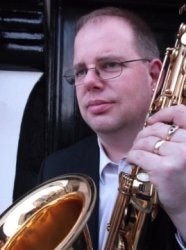 This is how 2 referees rated Jeremy:

I started my musical career at an early age when I learnt flute and piano, later adding saxes and clarinet to my repertoire.

As well as regularly appearing at clubs, festivals, weddings, parties and corporate events in the UK and abroad I've played at a number of prestigious venues including Royal Festival Hall, London, The Colston Hall, Bristol and London Astoria. I've also performed live on BBC national TV and national & local radio and recently played at a charity event attended by HRH Princess Anne.

I have 20 years experience teaching both adults & children at all levels - from absolute beginners to more advanced players.

This includes teaching pupils on a one to one basis and also in group workshop settings.

As well as teaching how to play an instrument I can teach all styles of music including jazz, swing, blues, rock & roll, pop, rock and classical.

I'm also experienced in teaching how to improvise and music theory including how to read music and chords.

Lessons are tailored for each individual pupil so they get the most out of them and achieve their aim - whether it's to gain qualifications/grades, develop a new skill or just wanting to learn an instrument to get pleasure from playing music.

Whatever the aim, learning to play an instrument has to be fun and enjoyable.