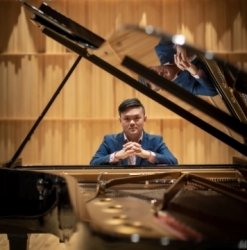 This is how 2 referees rated Edward:

Lauded as one of '16 Incredibly Impressive Students at Princeton University’ by Business Insider, American pianist Edward **Removed By Admin** has performed in concert halls across North America, Europe, and Asia.

Highlights of the 2019 – 2020 season include concerto performances with the Atlanta Symphony Orchestra with Stephen Mulligan and Orchestra of the Swan with Daniele Rosina; debuts at the Wigmore Hall and Laieszhalle in Hamburg; chamber music recitals in London, Winchester, Wiltshire, Ulverston, and Wye Valley, and a debut commercial recording with violinist Usha Kapoor for Resonus Classics. A 2019 – 2020 Live Music Now artist, he has swept all the major prizes
at the Royal Birmingham Conservatoire, including the Piano Prize, Donohoe Gold Medal, Andrew Downes Performance Prize, Delia Hall Accompaniment Prize, Herbert Lumby Prize, and Sheila and Colina Hodge Memorial Prize.

Edward received a Bachelor of Arts in the Woodrow Wilson School of Public and International Affairs from Princeton University, where he studied piano with Francine Kay. In 2016 - 2017, he was named the inaugural Aske-Princeton International Fellow at The Haberdashers' Aske's Boys' School in Hertfordshire, England. After receiving a Master of Music from the Royal Birmingham Conservatoire, he continues his studies in the Advanced Postgraduate Diploma programme with Pascal Nemirovski. He is gratefully supported by the Keyboard Charitable Trust.

I have broad experience in both individual tuition and classroom teaching.
I currently have a private teaching studio in Birmingham, and teach ABRSM (all grades) and university / conservatory-level students. In addition, I have taught both piano, strings, and chamber music. I also was a faculty coach at The Opportunity Music Project Chamber Music Intensive, 'Together In Music,' a summer programme for underserved youth in New York City.

In terms of classroom teaching, in 2016-2017, I was the inaugural Aske-Princeton International Fellow at The Haberdasher's Aske's Boys' School (which was named the 2017 Independent School of the Year by The Sunday Times), where I taught and advised Key Stage Three History, Sixth Form American Politics, and other Sixth Form electives. I have also taught Writing and English at the KS3 level in the United States.

I strive to inspire a passion for music in my students. In addition to working with pupils on their repertoire, I hope to introduce a holistic approach to music education through recordings, collaborative work, exercises to develop musicianship and musical knowledge, and other art forms. Goal-setting is also important, may it be for examinations, performances or objectives. At the end, I hope to instill in my students a lifelong interest in music, whichever paths they end up taking.