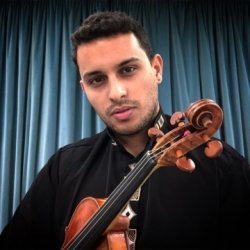 This is how 2 referees rated Bacem Anas:

Bacem Anas is a Tunisian concert violinist born in 1995.

At the age of five, He began studying the violin at his father’s music school with Professors Rachid Koubaa and Sem Slimane. At the age of nine, he made his debut as a soloist with the Tunisian Symphony Orchestra playing concertos by Dancla and Viotti at the Municipal Theatre of Tunis. His performance was recognised by multi-award-winning producer Hichem Ben Ammar and later became the driving force for the documentary ‘Once Upon Our Time’ released in 2010, winning prizes in Tunisia, Italy, France, Qatar and beyond, which chronicles his musical journey.

At the age of ten, Bacem Anas launched his international career when he was scouted to represent Tunisia, Africa and the Arab world playing with the World Philharmonic Orchestra as part of the ‘Five Children of the World’ under the baton of world renowned Japanese conductor ‘Yutaka Sado’ in Paris 2006. During the tour, Bacem Anas won 1st prize at the ‘Vatelot-Rampal’ competition (France). Shortly after a few performances in Les Invalides and Reims, the Jean-Luc Lagardère Foundation granted him a scholarship which he used to study abroad with leading teachers in France, Lyon, Brussels & Switzerland. Later that year, he attended the ‘Tibor Varga’ masterclass in Switzerland with the great Russian soloist Victor Pikayzen. Bacem Anas was the youngest member ever to join the group - one of just eight successful applicants out of one hundred. His success came to the attention of the President of the Tunisian Republic, which led to his invitation to the Presidential Castle, where he was honoured for his contribution to Music.

At the age of eleven, Bacem Anas moved to the United Kingdom to join the prestigious Yehudi Menuhin School under a full scholarship made possible by the Habib Bourguiba Foundation. He studied with Akiko Ono and Simon Fischer. Since then, he has played in concerts as a soloist and in chamber music in venues such as Wigmore Hall, Menuhin Hall, Nightingale House, and on tours with the Yehudi Menuhin School orchestra at Mansion House and Thaxted Church (UK), the Muziekgebouw (Holland) and for the Yehudi Menuhin Festival (Switzerland). Bacem Anas is regularly invited back to play with the Tunisian Symphony Orchestra as part of his ‘Artist in Residence’ position. His concert appearances include City of Science, El-Jem Roman Theatre, Acropolium of Carthage, International Festival of Carthage, Municipal Theatre of Sousse.

After graduating from the Yehudi Menuhin School in 2014, Bacem Anas received a full scholarship to the Guildhall School of Music and Drama, where he continued his Bachelor’s degree with Prof. Simon Fischer. He graduated in 2018 and undertook a Master’s degree at the Royal College of Music, London with Professor Radu Blidar, under a full scholarship and graduated in 2020. He will carry on his International Artist Diploma alongside a conducting course at the Royal College of Music.

I have teaching experience with kids from basics to advanced levels both in the U.K. and abroad.
My father has a music school back in Tunisia, where he regularly deals with beginners all the way to advanced levels. I regularly help his students when I’m back.

I teach the student to love not only playing the violin but to have love for the music. I usually try to figure out what each individual needs to be able to advance to the next level.
I think if I have to say one key factor that I can offer, is that I’m good at giving the student the right tools to know how to practice between lessons, so improvements can easily be achieved if the homework is done regularly.